Two Star Wars fans spent an evening getting creative on Photoshop combining stormtrooper helmets with a variety of fun themes.

Being enormous Star Wars fans we thought we would create something a bit different one evening after work, mixing storm trooper themed designs with pop art and cool themes, we couldn’t be happier with the final results, here are 6 of our favourites although there are about 6 more that we created afterwards, you can see all of the designs here.

We used this original image of a Plastic model Stormtrooper Helmet, popped open a cold beer and then got to work.

We started out simply with a space-themed Helmet incorporating the Death Star and some Empire ships, we were quite pleased with it but thought we can take this 12 or 3 steps further?.

Prototype 1, yep we can do it and it looks pretty cool, I’d have this on my wall, the black and white colour scheme works well but a splash of colour wouldn’t go amiss… what can we do next? 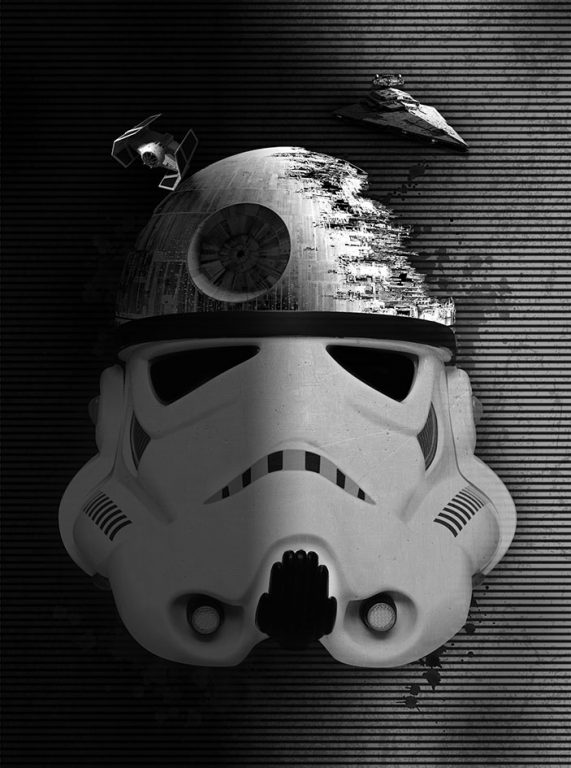 So we thought, why not try a Piet Mondrian hybrid? Stars Wars meets Modern Art, so we added a Mondrian style design to the stormtrooper helmet, then blended the space background a bit with a Mondrian artwork and came up with this funky creation. 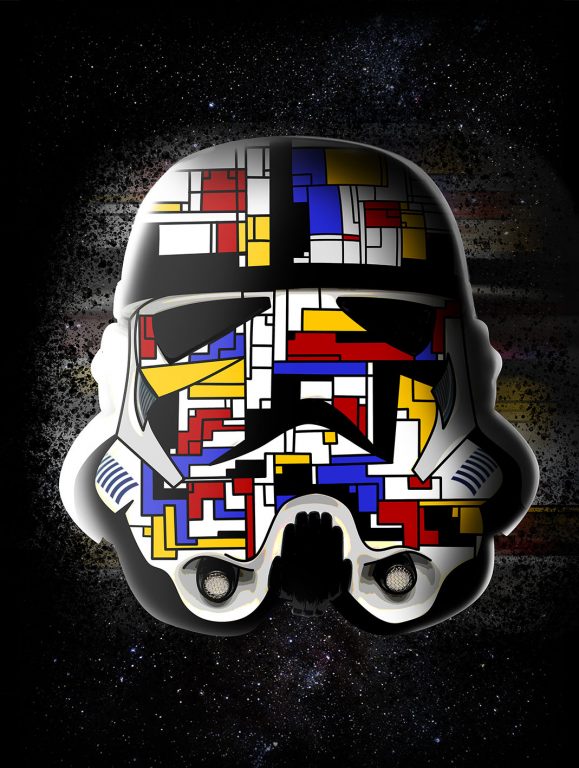 Now for something topical

Just as we finished creating the Mondrian it was announced on TV that the music legend David Bowie had just passed away, we spoke about what a loss to the music world and world, in general, this was and decided to make a commemorative gesture of our own and voila! Ziggy Stormtrooper Stardust was born and hell yeah we liked this one!  Easily our favourite so far with that stylish red slash across the face and blue smoky background to evoke scenes of smoky concerts back in Bowie’s heyday. 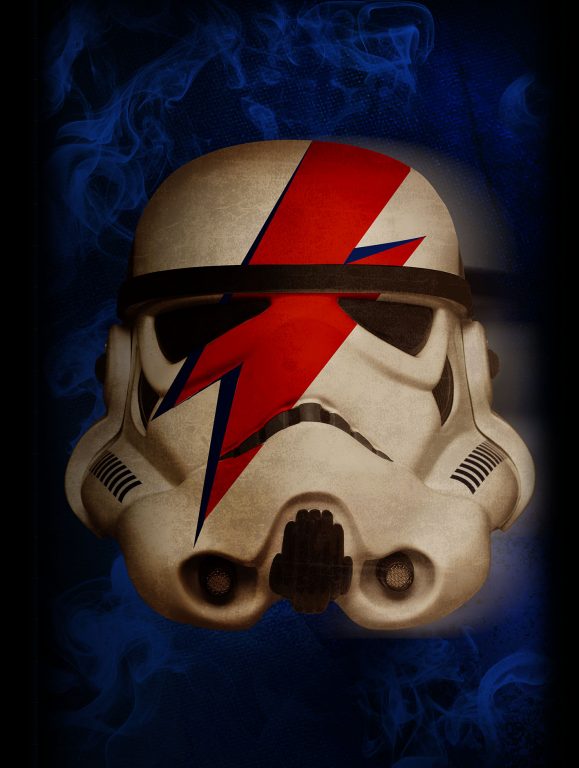 By this point, we were on a run and thought let’s take it one step further and transform one of our favourite Marvel characters into a soldier of the Darkside…. BOOM… Spiderman meet your alter ego…SpiderTrooper! This guy would surely be the bane of the Rebels with his laser and firing some sticky web ball things… look out Luke this guy can swing from the parapets. ‘Hey this is fun’ said Terry working beside me as he cracked open another bottle of beer and announced he wanted to try something a bit different, something a bit more colourful maybe even Aztec themed, I remember thinking at this point that perhaps Terry had had one beer too many but nevertheless decided to run with his ideas and together we created this lurid but certainly interesting stormtrooper that we aptly named ‘The Aztec Trooper’ more because of the inspiration than the final result.

Then to really add some pizazz we added some purplish cosmic space background to the design, both look pretty good and we were undecided about which one is better. ‘Okay, my turn’ I announced, I suggested we stick with the colours but maybe a more stripy style, I also wanted to go a bit more old-school and revert back to the original stormtrooper helmet that for me has a lot more authenticity, Terry passively nodded in agreement but very quickly began to run with the theme and our final result looked pretty good even if we do say so ourselves 😉 Another Star Wars / Modern Art creation that Gerhard Richter might be proud of. 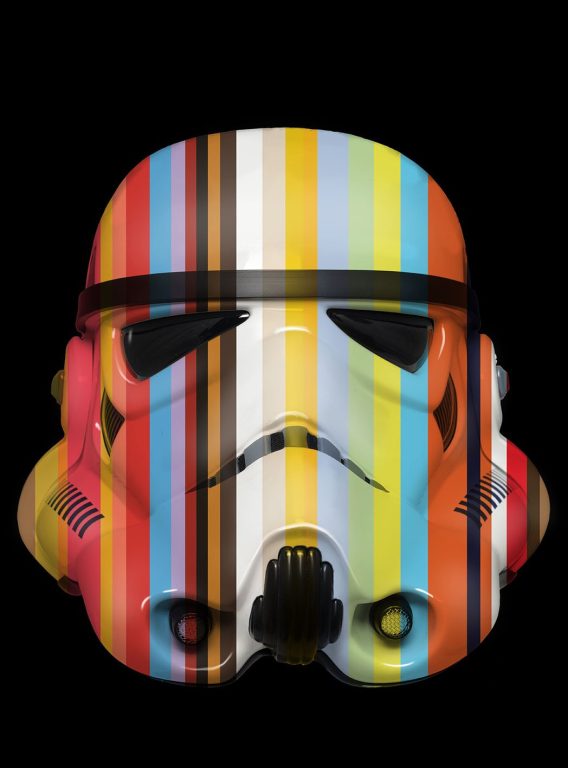 It was now getting pretty late and Terry (and maybe myself) were starting to get a little bit bleary-eyed, I guess we kind of looked at each other with a look that said ‘one final creation for the road?’…. So …using the same stormtrooper helmet as the last one we created an almost ‘Dia de Los Muertos’ style design in a very cool orange and green floral layout. 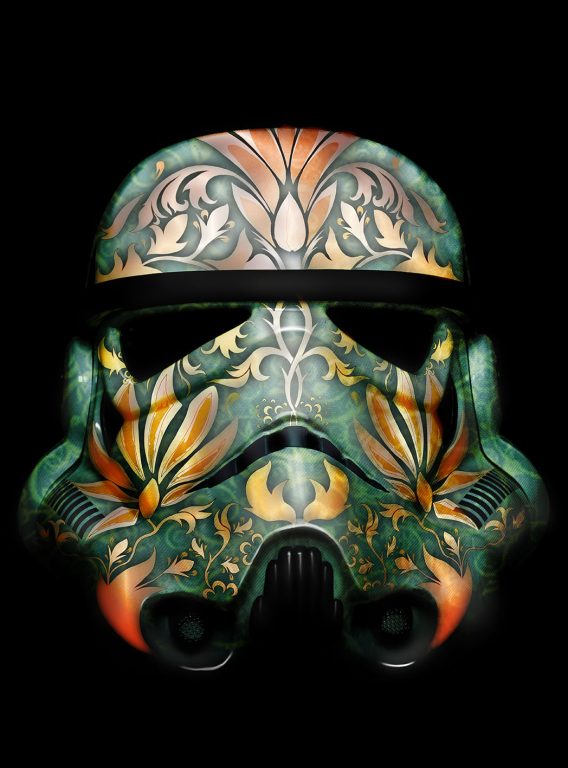 And that was it, our work was complete and something we could both be quite proud of, even the morning after! It just goes to show you what a few beers, a couple of creative minds and some good old inspiration from the Darkside is capable of. We actually liked them so much that a further 6 more designs we’re created over the next few days. These later additions to the set can be seen here and the set of six together here.