Takashi Murakami, born February 1, 1962, is a Japanese contemporary artist. He works in painting and sculpture, as well as commercial media and likes to blur the line between high and low art. He coined the term “superflat”, which describes both the aesthetic characteristics of the Japanese artistic tradition and the nature of post-war Japanese culture and society, and is also used for Murakami’s artistic style and other Japanese artists he has influenced. 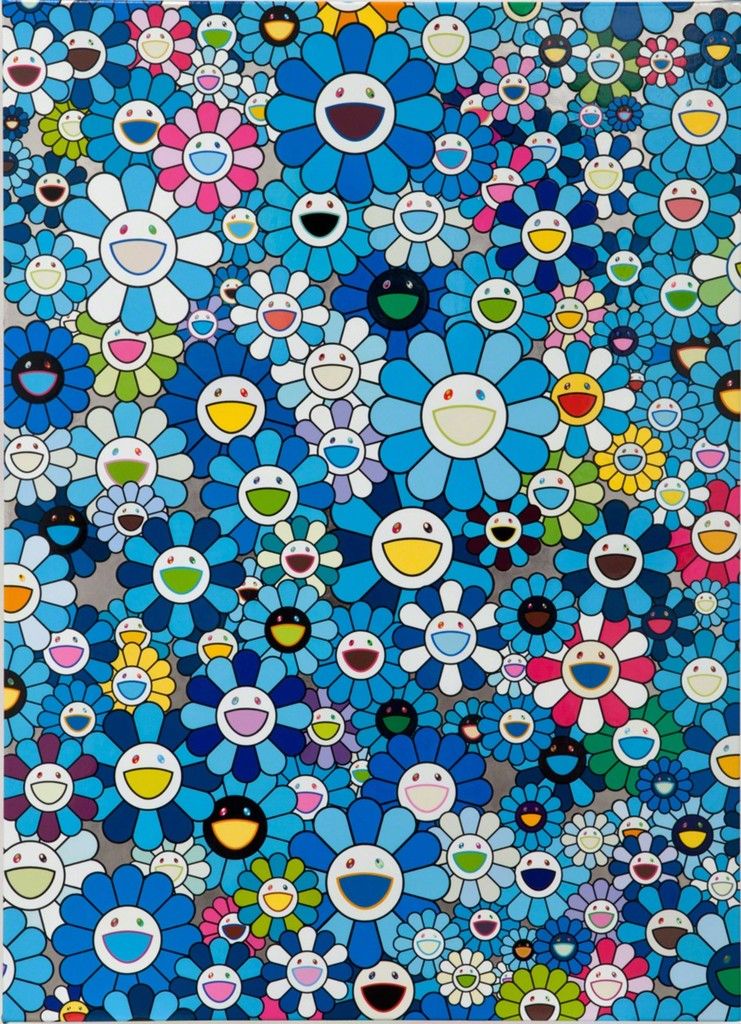 Smiling daisies and large-eyed skulls overwhelm this pictureand blend together with the aid of the work’s blue color scheme. The digitally composed flowers are reminiscent of the yellow “happy face” emoji, as well as computer graphics used in video games. The mash up of cuteness and death are Murakami’s way of both engaging with – and critiquing – the Japanese obsession with Kawaii (cuteness). Although this work looks incredibly contemporary in both style and content, the process of its creation through serialized production and the use of computer databases of vector drawings is directly connected to the copying culture in pre-modern Japan. Murakami revives the traditional concepts of collaborative creativity, expression, and execution.

At the invitation of the designer Marc Jacobs, Murakami started a 13-year long collaboration with the fashion brand Louis Vuitton. One of Murakami’s designs features the LV signature monogram in ninety-seven different colors with his own signature jellyfish eyes repeated on black or white backgrounds. Through this popular project, Murakami has successfully become a pioneer of promoting art as a commercial brand. This landmark collaboration also brought in over 300 million dollars for Louis Vuitton. While many art critics and collectors scoffed at his blatant commercialization, for the artist it is simply the business.

The painting The World of Sphere, created in 2003 comes after Murakami’s more than successful collaboration with the fashion brand Louis Vuitton.

In 2002, Murakami did a series of designs for the company and the commercial success of the collaboration inspired the artist to re-appropriate the same patterns and LV multi-colored monogram. Along with whimsical characters and colorful background the pieces is instantly recognizable.

Psychedelic, multicolored flowers are a recurring motif in Murakami’s work. Bright and joyful flora is sometimes juxtaposed to the skull imagery, creating a dichotomy the artist especially likes to examine.

In Vapor Trail painting, created in 2004 there is no room for disturbing imagery and the artwork evokes a cheerful atmosphere. The emblematic, candy-colored flowers gained an iconic status in Murakami’s work over the years and they are also appreciated by the collectors.

Murakami’s DOB paintings are possibly the most popular Murakami pieces. Their value has been growing steadily on the art market in the last ten years and the trend seems to be ongoing. Murakami introduced his Mr. DOB back in 1993, and this hybrid cartoon-like character, which brings together Western and Japanese animation elements, became one of the most recognizable Murakami’s creations. The piece And then, and then and then and then and then, featuring DOB in two colors, was sold at Phillips New York in 2010, fetching a hammer price of $2,000,000.

Made in an edition of three, with variations on each piece, this sculpture titled Pandawas another of Murakami’s collaborations with Louis Vuitton. It is a fiberglass Pandasculpture that features patterns Murakami designed for the LV campaign, and it is standing on the antique Louis Vuitton trunk.

The piece was auctioned twice, first at Phillips New York in 2005, where it sold below the low estimate for $320,000 and again at Philips London in 2008 surpassing the high estimate and achieving a significant hammer price of $2,380,000.

Made in 1999, DOB in the Strange Forestis a rather interesting piece. The sculpture is comprised of all signature elements, featuring Mr. DOB in the main role, surrounded by hallucinogenic mushrooms with iconic jellyfish eyes.Murakami said that the main inspiration source for this piece was the Disney film Alice in Wonderland and if we look closely we can see the resemblances. This work clearly reflects a time in his art prior to the huge commercial success of his Louis Vuitton partnership. 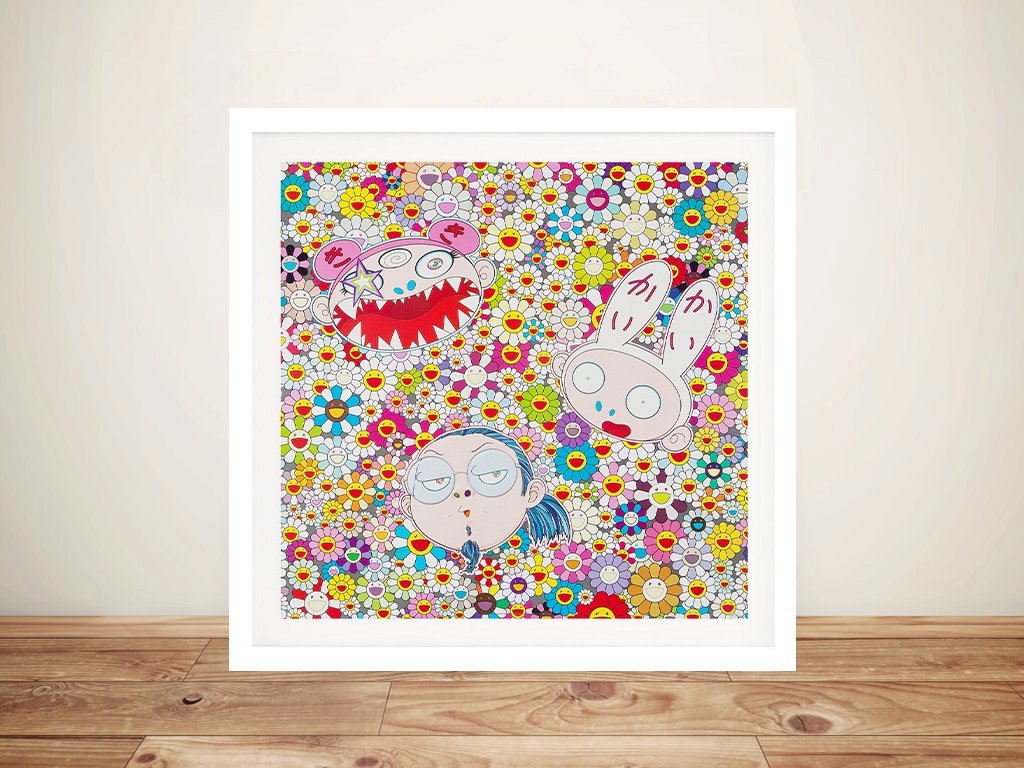 8 Takashi Murakami, Kaikai Kiki And Me – The Shocking Truth Revealed

“KaiKai Kiki and Me–The Shocking Truth Revealed!” features the flagship characters of Murakami’s art management company, and namesake, Kaikai Kiki, placed in the foreground of artist’s iconic, gestural flowers. Known for his works that combine Pop, animé, and otaku within a stylized picture plane, the artist is the founder of the postmodern art movement, “Superflat,” which combines elements of Japanese culture with a flattening of the image that recalls 19th century Japanese printmaking.

The Castle of Tin Tinis one of Murakami’s most praised DOB paintings. It is also a painting that best illustrates the transformation of his DOB character from a lovable and cute creation into a monstrosity with sharp teeth and menacing smile. In this painting DOB shows the darker side of the popular culture, a phenomenon Takashi Murakami deconstructs continually. Back in 2012, The Castle of Tin Tin set the record for the artist’s paintings achieving a hammer price of $3,700,000 at Sotheby’s New York. 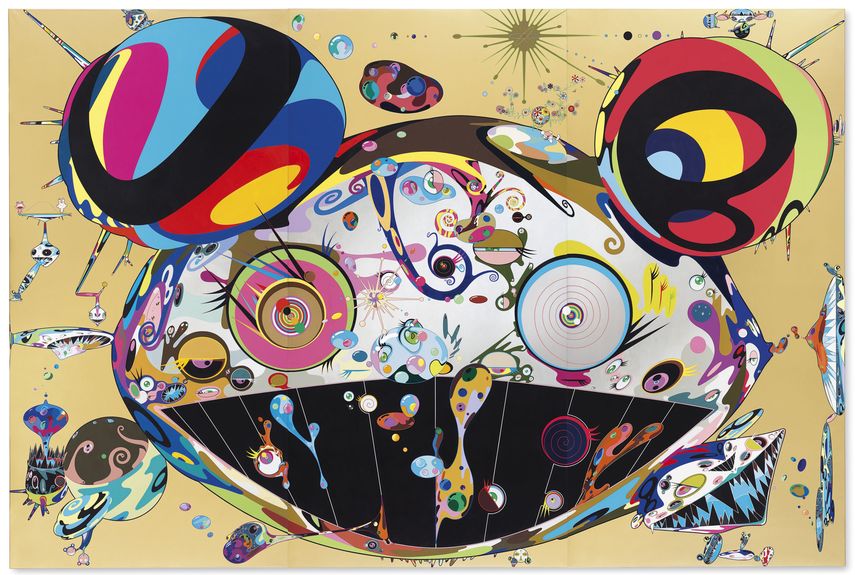 Described by curator Michael Darling as the artist’s “magnum opus”, Tan Tan Bois an icon of Murakami’s oeuvre, demonstrating the new levels of complexity that began to infiltrate his practice at the turn of the millennium. The piece depicts Mr. DOB, the artist’s iconic figure, rendered across three large gold canvases. Hovering next to his right ear are early examples of the artist’s signature smiling flower motifs. The most represented subject across Murakami’s wide-ranging practice, Mr. DOB stands as the artist’s alter ego. It is based on Mickey Mouse, but with a more cunning and volatile figure than his Disney counterpart.