If asked to name the most famous painting in the world, the chances are you would say the Mona Lisa. Why? Is it the best? That is a personal opinion but most will agree that it is the most iconic.

At the beginning of the last century, however, she remained largely unknown outside of a select circle in the Western art world. That would change in 1911. 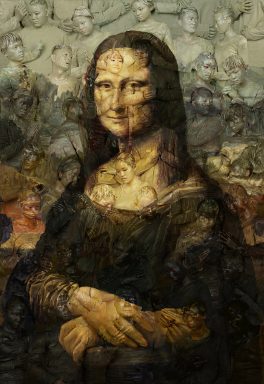 In August 1911, an Italian named Peruggia walked from the Louvre unopposed with the painting under his jacket. The theft went unnoticed for 24 hours.

The French press enjoyed the opportunity to poke fun at the Louvre authorities and the story just kept on getting bigger. The police investigation staggered from one fiasco to the next.
Guillaume Apollinaire, a poet who had threatened to burn down the Louvre, was arrested and jailed but quickly pointed the finger at his ‘friend’ Picasso, who had unwisely just sold some statues stolen from the Louvre. Both were finally acquitted. Peruggia was interviewed twice but deemed too stupid to have undertaken such an audacious theft. The head of the police investigation resigned in shame.

The scandal and the unanswered questions were ideal fodder for the media. Increasingly scathing attacks on the police and the Louvre were accompanied by photos of the Mona Lisa. The articles included snippets about the painting such as the enigmatic smile, disputes as to her identity and other questions. Newspaper circulation rose, and the story went global, taking with it awareness of the Mona Lisa. She quickly became a household name around the world.

Back at the Louvre

The original remained undiscovered for two years, hidden in Peruggia’s flat in Paris. Eventually, the Italian, under the misguided notion it had been stolen from Italy at the orders of Napoleon, offered it back to the Italian nation for a hefty reward. The Italian police were contacted and Perrugia was arrested, tried but strangely spent less than a year in a French prison. A bizarre anti-climax to one of the art world’s greatest thefts.

Is it the Original?

Unlike in 1911 when the painting simply hung on a hook on the wall, today the Mona Lisa is protected by numerous anti-theft and anti-vandalism devices. To view her, you must pass through airport-style security, along with jostling crowds of people, to stare – cordoned off at a distance – at her image safe behind a glass wall. Are you looking at the original or a copy? How could you tell?

Fortunately, no-one seems to care and six million people a year continue to queue for hours to get a brief glimpse of her inscrutable smile. Would they bother if Perrugia had not slipped the painting under his jacket over a hundred years ago? Maybe not.