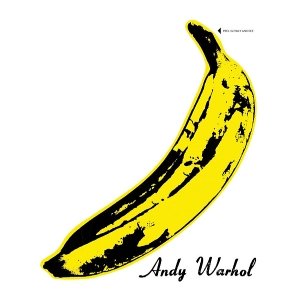 In the 1960s Andy Warhol was associated with the band The Velvet Underground. Wanting to add rock & roll to his Factory’s repertoire, Warhol offered to act as the Velvet Underground’s manager in 1965, despite not knowing what that normally entailed. This print of banana featured on the cover of the debut album of the band, titled The Velvet Underground & Nico. The album was called the “most prophetic rock album ever made” and ranked 13th greatest album of all time by Rolling Stonemagazine; and Warhol’s Bananabecame one of the most recognizable pieces of pop artwork. 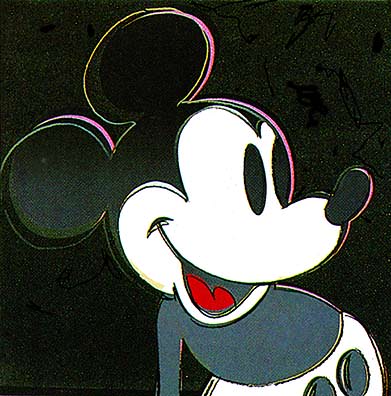 Andy Warhol typically depict real-life individuals with is works but exceptions included the figures in the “Myths” portfolio, a group of ten prints published in 1981 that feature American pop culture icons from the 1950s, including Superman, Santa Claus, and Mickey Mouse. Walt Disney’s iconic mouse is depicted in profile, surrounded by a background covered in diamond dust, adding a touch of Hollywood glamour to the beloved cartoon character. You can buy it here on the site.

In 1963, the last two executions by electric chair in New York State took place. Electric Chair 1964 consists of a medium-size canvas that has been screen printed with silver acrylic paint. Electric Chair is part of Warhol’s substantial Death and Disaster series that the artist started in 1962, early examples of which depicted car crashes and suicides as illustrated in newspaper images. With this series Warhol began to explore the effect of reproducing such images repeatedly across a canvas, testing his hypothesis that ‘when you see a gruesome picture over and over again, it doesn’t really have an effect’. Warhol’s fascination with death indicated his interest in its continual presence in our everyday lives, but also our apparent distance from its impact. Notably, in contrast to the repetition of earlier Death and Disaster images that depicted the tragedies of its human subjects, Electric Chairis devoid of all human presence.

This is one of the seven monumental-scale paintings from Andy Warhol’s famous Flowers series. The source image for the series was photographs published in the 1964 issue of Modern Photography taken by the nature photographer Patricia Caulfield. Warhol first exhibited these works as part of his first show at the Leo Castelli Gallery. To create these works, Warhol manipulated the color of the flowers to become much more vibrant against a dynamic background. The image was also cropped to fit into the perfect squares canvases, ensuring the paintings can be viewed from any angle. The appearance of the flowers has drawn comparisons to Matisse’s cutouts and Van Gogh’s colorful bouquets. At a time when Warhol was concentrating on consumerism, celebrity, death and disasters, the series was a departure as it depicted a more abstract and philosophical subject. The paintings were immediately sold out when they were put on show. 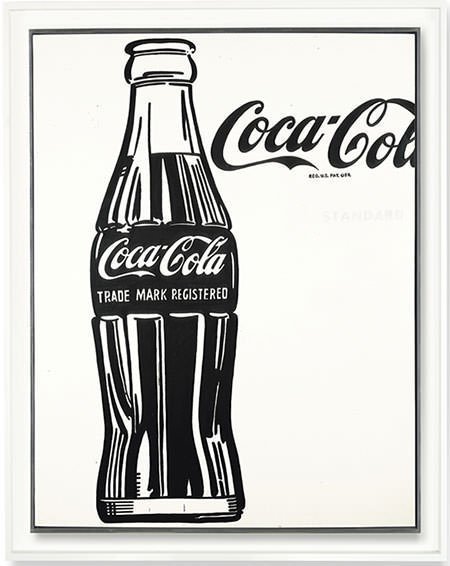 A symbol of modern mass consumerism, the Coca Colabottle is an iconic American object which caught the fancy of Warhol. This large, sleekly executed, black and white portrait of the famously curvaceous Coca-Cola bottle is one of the first great icons of American Pop Art as well as being the painting that set the artist on his creative path. The most recognizable brand in the world, Coca-Cola is a symbol as resonant and contentious today in our globalized age of corporation culture as it was at the height of the ‘Mad-Men’ era of the early 1960s when Andy Warhol first made it. Coca Cola 3 is an historic work, and as Warhol’s memoirs of the 1960s attest, the story of its genesis is also the story of the beginnings of Pop Art in America. The artist said of this work, “I just paint things I always thought were beautiful, things you use every day and never think about.”

Warhol began painting portraits of Maoin 1972, the year U.S. President Richard Nixonmade his first visit to China. He created hundreds of images of Mao using a photograph from Mao’s famous Little Red Book. This huge painting is about 15 feet tall and is the most well-known Mao portrait by Warhol. Warhol has used strong, colorful brushstrokes applying garish colors like makeup on Mao’s face. It exhibits Warhol at his most painterly self and is considered one of the best paintings created by him. You can buy it here on the site.

This famous work belongs to the last series of self-portraits which Warhol painted in the year before his death. It is one of the five versions (green, blue, purple, yellow and red) of the set. The image of the time-worn artist with the remarkable fright-wig is one of the iconic images of the twentieth century. Self-Portraitis an acrylic paint and screen-print work on canvas, a large portrait of Warhol which employs an arresting colour scheme in which the artist’s vivid red head floats against an empty black background. The artist’s neck, shoulders and torso have been excluded from the portrait, focusing the attention on his face, expression and hair. Warhol stares directly out at the viewer with an intense gaze, his lips slightly parted and his expression blank. The most animated part of the portrait is the artist’s hair, which sweeps strikingly across the canvas in a strong, diagonal movement from the top-left corner down towards the lower-right. 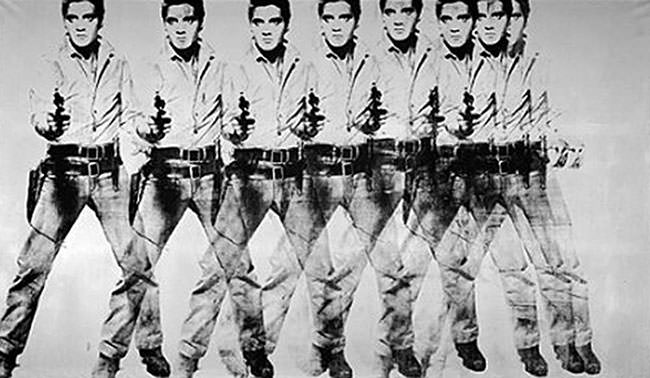 A 12 foot painting of eight identical, overlapping images of Elvis Presley in cowboy attire, Eight Elvises is a unique painting because it was not mass produced like many of Warhol’s work. In 2008, it was sold forUS$100 million which broke the record for a Warhol painting and the price paid for Eight Elvisesis still the maximum for a painting by Warhol if you adjust for inflation. It remains one of the most expensive paintings ever sold and is considered one of Warhol’s masterpieces. 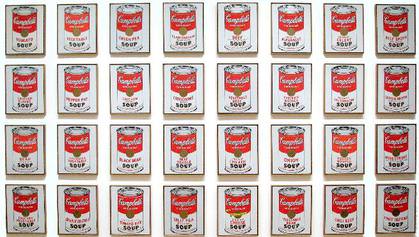 Warhol’s Campbell’s Soup Cans consist of thirty-two canvases, one of each of the 32 varieties offered by the company at the time. This is the defining work of art that led to pop art becoming a major art movement in the USA. The non-painterly style and thecommercial subject of the painting initially caused offence as it affronted the technique and philosophy of Abstract Expressionism, which was the dominant style in the United States until this point. The resulting debates on the merits and ethics of such work made Andy Warhol the leading and most well-known pop artist.

Marilyn Monroe died in August 1962. In the following weeks, Warhol made this masterpiece which contains fifty images of Marilyn, all based on the same publicity photograph from the 1953 film Niagara. The 25 images on the left side of the work are vividly colored while the 25 on the right are in black and white with an effect of fading. Critics suggest that the contrast is suggestive of the star’s mortality. Considered an iconic symbol of pop art, Marilyn Diptych was named the third most influential piece of modern art in a survey by The Guardian.