Today we’d like to introduce you to one of our new artists. We recently added work by Utagawa Hiroshige to our collection of canvas prints and wall art. Hiroshige was a Japanese artist born Andō Hiroshige (1797 – 12 October 1858). His art is in the style known as ukiyo-e and he is considered the last great master of that tradition. Ukiyo-e translates as “pictures of the floating world” and was a popular and influential style of Japanese art. 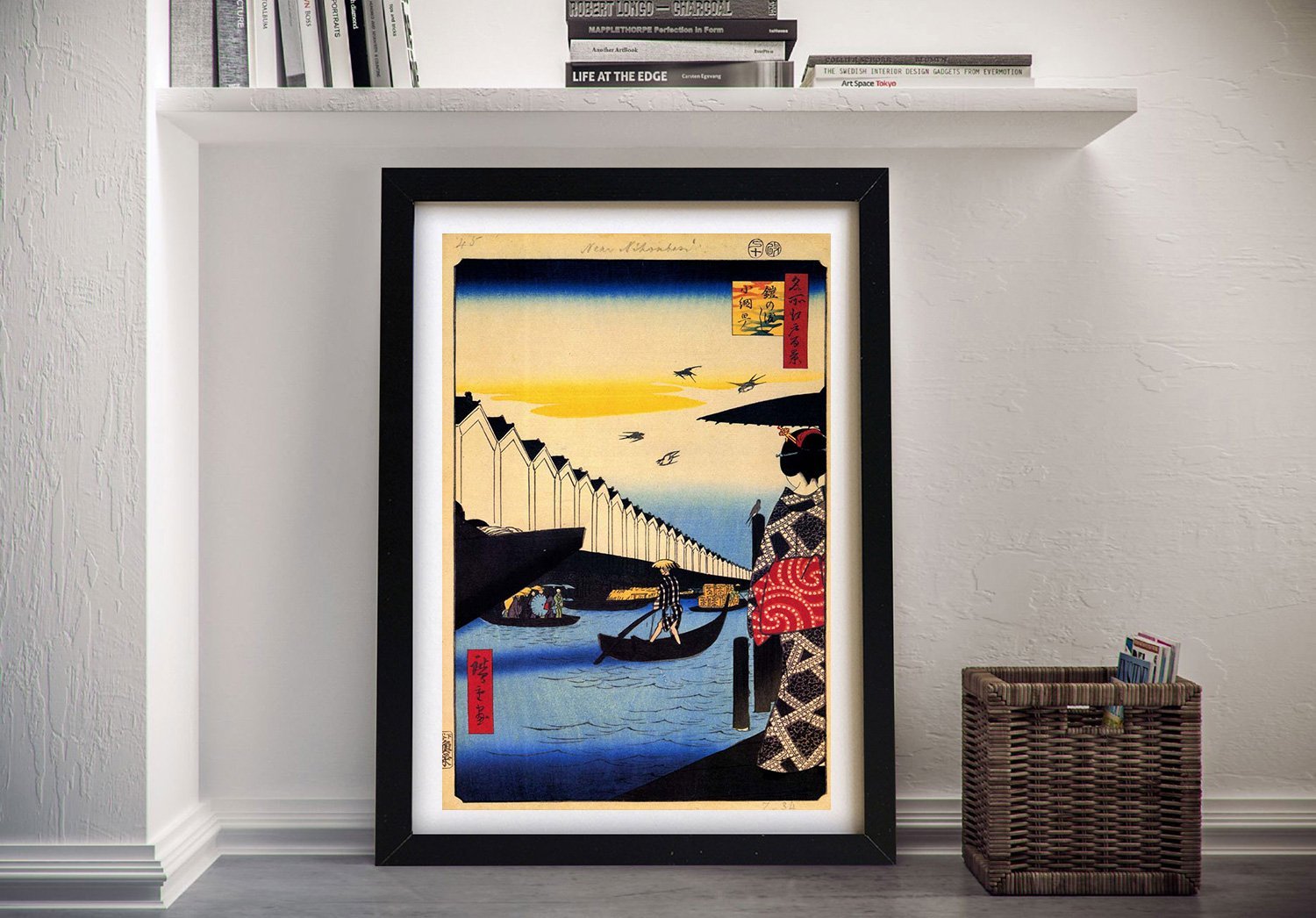 Hiroshige was known to have several names as a child, Jūemon, Tokubē, and Tetsuzō. He earned the name Hiroshige upon his artistic studies with Toyohiro. Hiroshige’s apprentice work included book illustrations and single-sheet ukiyo-e prints of female beauties and kabuki actors in the Utagawa style, sometimes signing them Ichiyūsai or, from 1832, Ichiryūsai. By 1812 Hiroshige was permitted to sign his works, and began using the name he is known under today.

It wasn’t until 1829–1830 that Hiroshige began to produce the landscapes he came to be known for. His works progressed after he was invited to join an official procession to Kyoto in 1832. Hiroshige saw this as an opportunity to travel along the Tōkaidō route that linked the two capitals and he sketched the scenery along the way. When he returned to Edo he produced the series The Fifty-three Stations of the Tōkaidō, which contains some of his best-known prints. He following it with others, such as the Illustrated Places of Naniwa (1834), Famous Places of Kyoto (1835), another Eight Views of Ōmi (1834).

At the time Hiroshige’s popularity rose, Japan’s shogunate society was beginning to relax the rules controlling the general population’s movements around the country and people began to leave their home villages and travel to other places more often. This assisted Hiroshige’s style of landscape scenic art to rise in popularity. People were able to get out and explore the countryside through their own eyes and through the eyes of the artist. 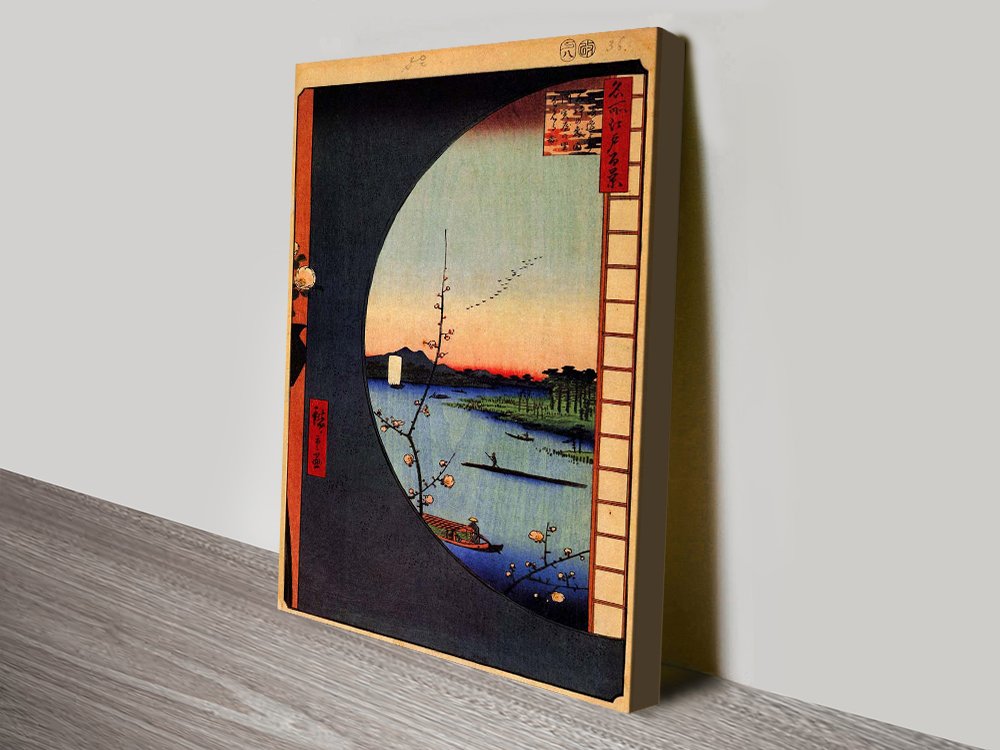 The Fifty-three Stations of the Tōkaidō, was his break out series from which all future success came. These designs were drawn from Hiroshige’s actual travels and included details of date, location, and anecdotes of his fellow travelers. This series was so popular that he reissued it in three versions, one of which was made jointly with Kunisada. Hiroshige went on to produce more than 2000 different prints of Edo (modern Tokyo) and post stations (way stations and rest stops frequented by travellers), as well as series such as Thirty-six Views of Mount Fuji. Of his estimated total of 5000 designs, these landscapes comprised the largest proportion of any genre.

He dominated landscape printmaking with his unique brand of intimate, almost small-scale works compared against the older traditions of landscape painting descended from Chinese landscape painters such as Sesshu. The travel prints generally depict travelers along famous routes experiencing the special attractions of various stops along the way. They travel in the rain, in snow, and during all of the seasons. In 1856, working with the publisher Uoya Eikichi, he created a series of luxury edition prints, made with the finest printing techniques including true gradation of color, the addition of mica to lend a unique iridescent effect, embossing, fabric printing, blind printing, and the use of glue printing (wherein ink is mixed with glue for a glittery effect). Hiroshige pioneered the use of the vertical format in landscape printing in his series Famous Views of the Sixty-odd Provinces. One Hundred Famous Views of Edo (issued serially between 1856 and 1859) was immensely popular. 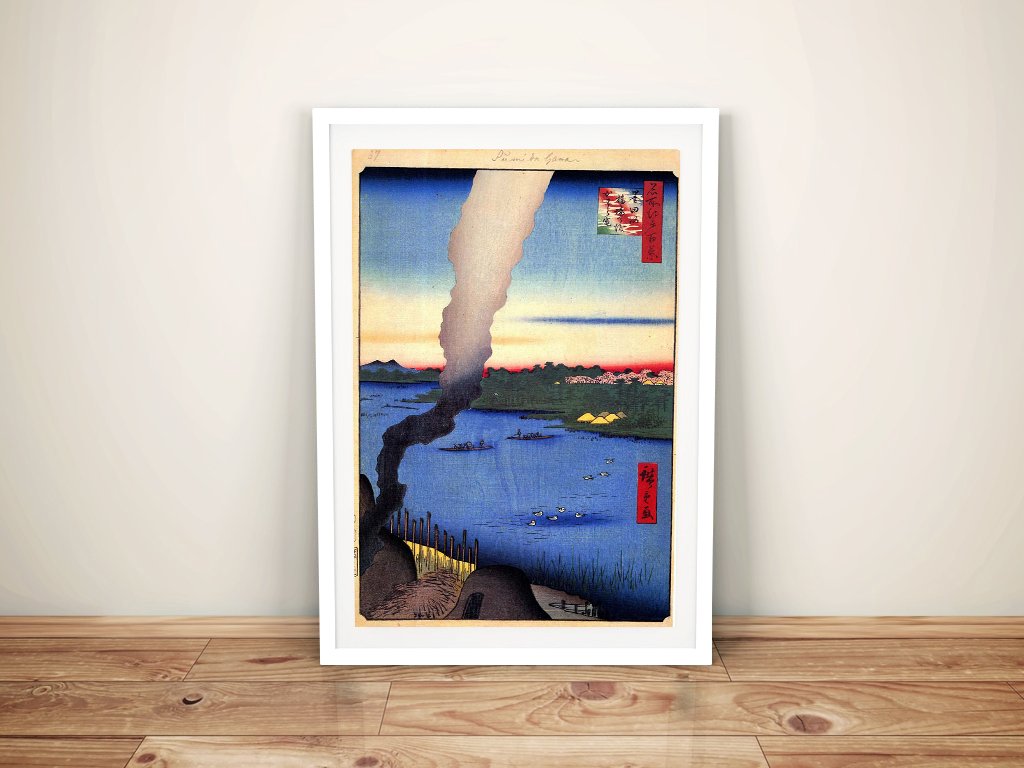 Hiroshige’s prints continue to convey the beauty of Japan and provide insight into the everyday life of its citizens. The appeal of his landscapes were not restricted to the Japanese audience, and his work extended its influence to the Impressionists and Post-Impressionists of Europe: Toulouse-Lautrec was fascinated with Hiroshige’s daring diagonal compositions and inventive use of perspective, whereas Van Gogh literally copied two prints from Hiroshige’s famed series, 100 Famous Views of Edo in oil paint.

We’d love you to check out the work of this intriguing artist, and we offer a selection of his work as canvas art prints, which are great to hang anywhere as wall art. You can really set the mood for a room with one of these stunning pieces.