Katsushika Hokusai creates brilliant prints that depicted timeless images that combined traditional Japanese art styles with contemporary techniques. He is known as a prodigy because of his extraordinary skill.

Katasushika Hokusai’s career spanned seven decades and he showed proficiency in art from many time periods, combing classic and modern techniques. He was married twice, and maintained personal relationships with many of his kin such as supporting his grandson. Hokusai’s subject matter included scene of Japanese people, actors or actresses, oceans, and mountain. 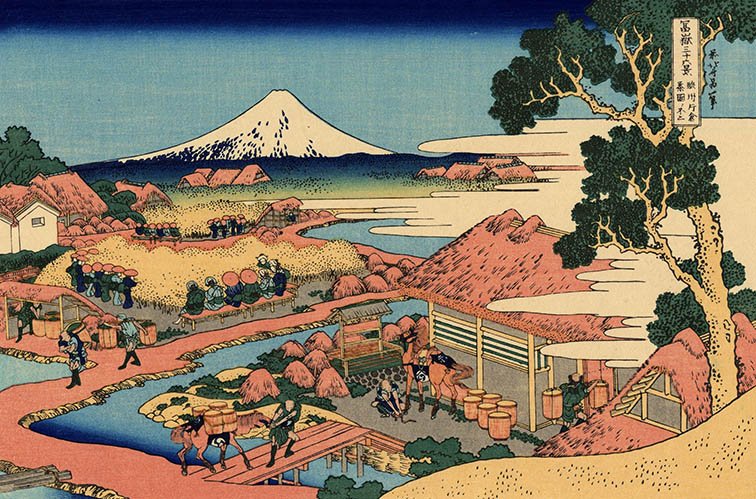 He was born in what is now known in Tokyo in the 18thcentury. Katsushika was adopted by his uncle who was a mirror polisher, and he started drawing at the age of 6 in a time and environment where people wanted realistic depictions of the world around them. He was part of the Nakajima family of artisans.

As a teenager, he worked as an apprentice to a wood block cutter and learned the complicated process. The technique of woodcutting involves carving strokes along with paint brush lines on a painting. Much of his work was commissioned through a publisher.

An Artist by Many Names

Hokusai gave himself the name Hokusai, which means North star. He worked under as many as 60 different names and relocated more than 90 times in his life. Hokusai was connected with many influential people and provided illustrations for story writers and poets. He spent time with sophisticated supporters who paid him to work as an artist.

Katshushika Hokusai is credited with having created the first manga, a word that means random or whimsical drawing. The first was rendered in a night, inspired by his friends urging him to paint a story. His first volume was published in 1814, and 14 volumes were published over the span of 64 years.

Hokusai published an article titled Quick Lessons in Simplified Drawing (Ryakuga haya oshie)in order to attract new students. His manga became popular in the West and influenced many European artists such as Manet.

In his 40s, his art drew the attention of Shoguns. He painted in front of them, first using a brush with a pot of blue ink. He then put red ink on a rooster’s feet and let him walk across the canvas, and titled it Red Sycamore Leaves on the River Tatsuta. This is a scene in many classical depictions, and his approach amazed the shoguns.

Late in his life became famous for what is known as the 36 Views of Mt. Fujii. Hokusai considered Mt Fuji a deity. The concept of the views of Mt Fuji series was to set up Mt Fuji as the fulcrum of the universe to highlight its importance to Japanese people.

The Great Wave is his most famous work. He uses tools of perspective learned from studying the European style. The subject matter is fishermen on a huge wave, with Mt. Fuji in the background. All of the scenes show people at work, with Mt. Fuji as part of the subject matter. There are agricultural depictions,

Hokusai is well known for his use of animals in his artwork. There are depictions of dragons, cranes, insects, reptiles, tigers, and domestic animals.

Other sketches focused on flowers and leaves. Later in his career, he focused more on natural subjects and depicting the tranquility of nature.

Hokisai is credited with inspiring the impressionist movement. His broad body of work spans decades and he is one of the most prolific and influential artists in the 20thcentury.