Born in 1862, Austrian painter Gustav Klimt became known for the highly decorative style of his works, which were seen as a rebellion against the traditional academic art of his time. His most famous paintings are The Kiss and Portrait of Adele Bloch-Bauer.

He was born on the outskirts of Vienna, Austria, on July 14, 1862. Klimt displayed a notable talent from an early age, and at just 14 years old left his normal school to attend the Vienna School of Arts and Crafts on a full scholarship. While at the institution, Klimt received a conservative, classical training.

Perhaps Klimt’s most famous work is the 1907 “Portrait of Adele Bloch-Bauer I.” Commissioned in 1903 by Bloch-Bauer’s wealthy industrialist husband, the work remained in the family’s possession until it was seized by the Nazis during World War II. The work’s storied past has been the subject of numerous books and documentaries and most recently is the focus of the film Woman in Gold, which stars Helen Mirren as Maria Altmann.

This painting is probably Klimt’s most famous. The couple embracing, melting into a beautiful golden background, is visually tantalizing and visceral. The most famous of all Gustav Klimt paintings, the central piece of the Vienna Secession art movement and one of the finest artworks of the early modern period, The Kiss depicts two lovers embraced on the edge of a flower field or meadow. 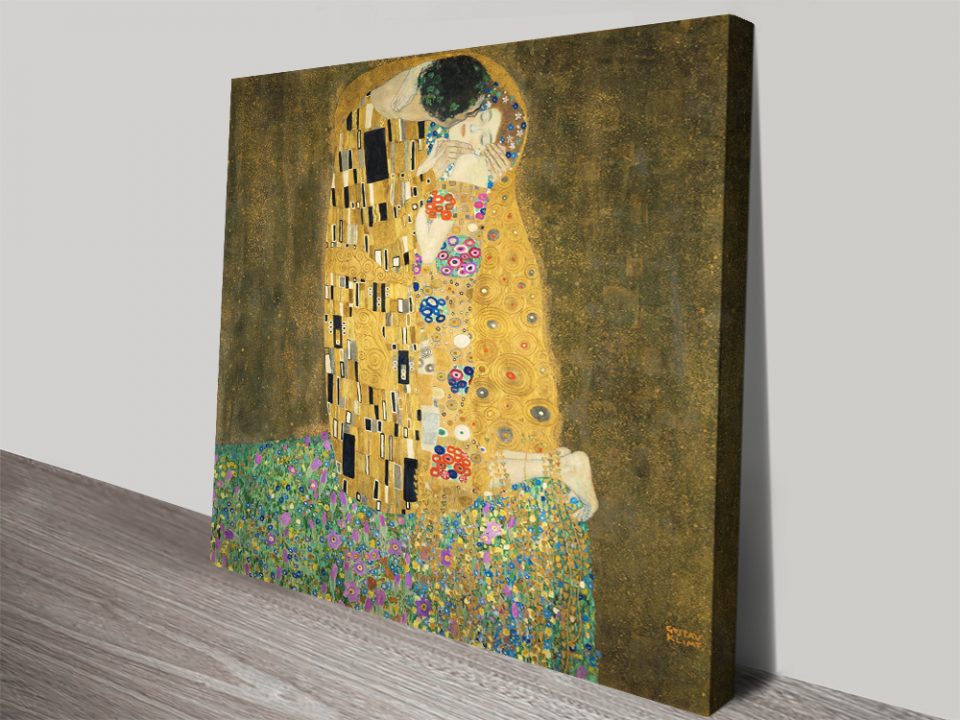 The Portrait of Adele Bloch-Bauer I, completed in 1907, is the first of two Klimt’s portraits of Adele Bloch-Bauer, wife of an influential industrialist who financially supported the artist. The last painting from Klimt’s so-called Golden Phase series was supposed to be donated to the Österreichische Galerie Belvedere after Adele’s death but her husband kept the masterpiece. During the Nazi occupation of Austria, the painting was confiscated which later led to a dispute over the ownership between the State of Austria and Bloch-Bauer heirs who eventually won the “battle”. 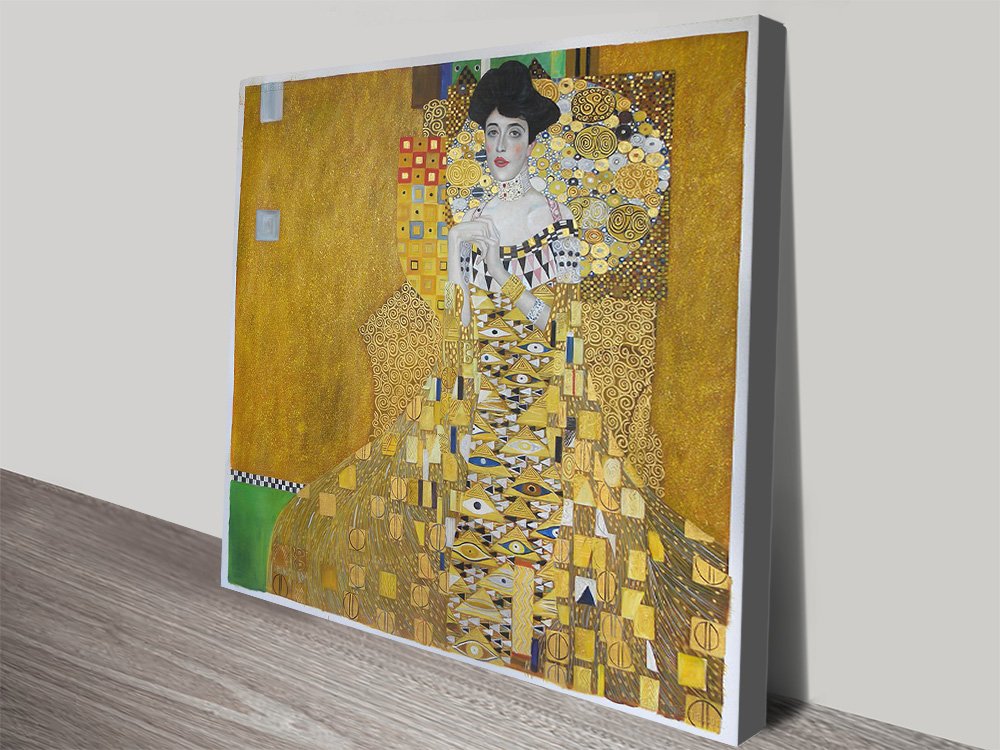 Hope II depicts a pregnant woman with bare breasts and elaborate shawl. Her head is bent towards her belly featuring a human skull which is thought to represent death or danger to her unborn child. The woman is thought to be either in pray for her child or worried about the impending threat. At her feet are three female figures with their heads bent as well – either in pray or mourning over the fate of the child. 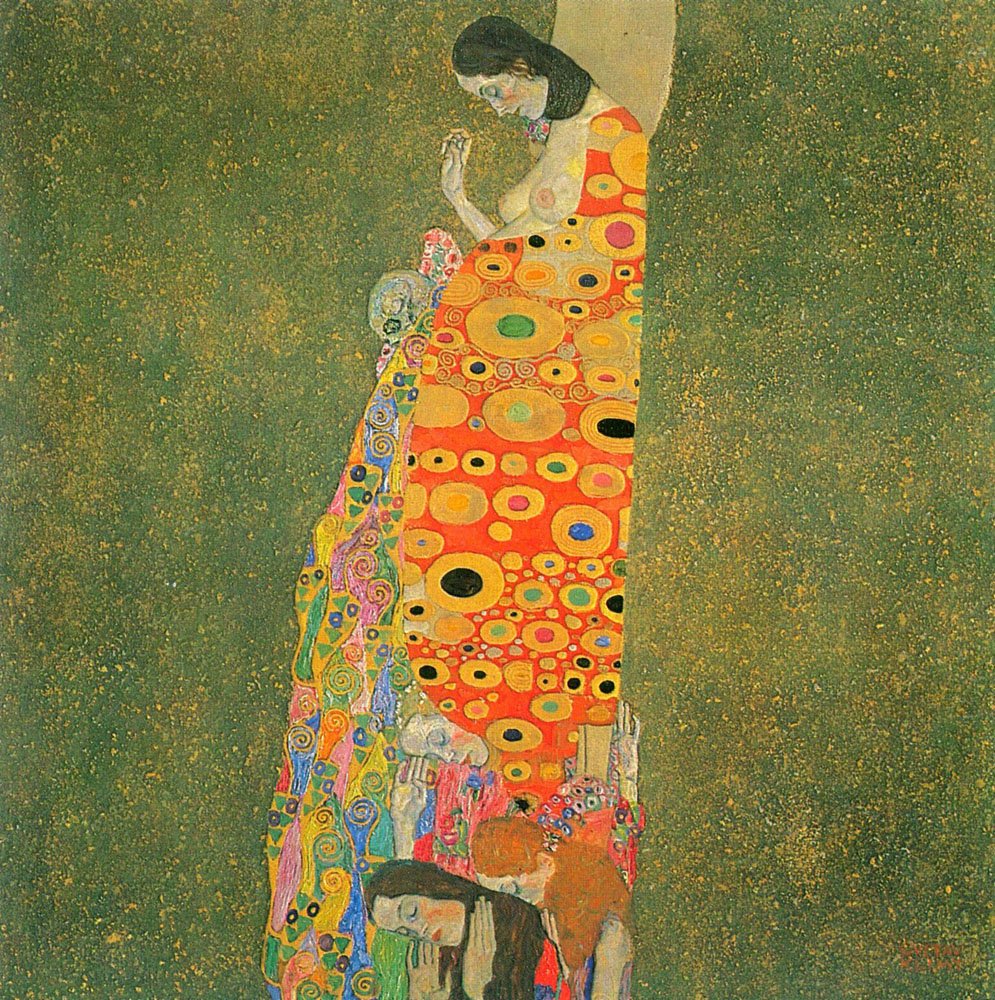 This allegory of life and death, with people in various states of emotional embrace and a skeleton looming nearby, remains one of Klimt’s most popular. Painted in 1910, the oil on canvas is an allegory of life and death. Death depicted in the form of a human skeleton in a dark robe on the left is presented as a perpetual threat to people, both young and old. The overall message of the painting, however, is positive. Death may lurk around the corner and indiscriminately take life but it cannot win against the never-ending circle of life. Death & Life is one of our favourite artworks on the website. 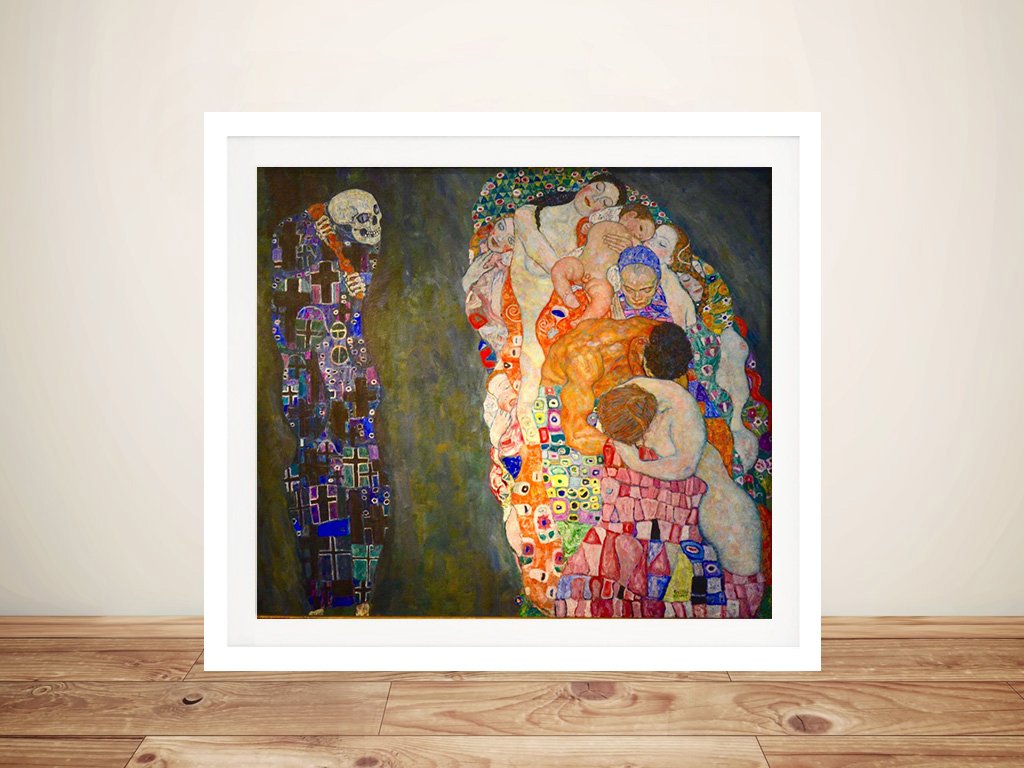 Blooming, swirling, and glowing with gold, The Tree of Life is one of Klimt’s earlier works that represent the boldness and pervasiveness of life. The painting continues the symbolic work of the artist, using a subject here which can be found in many areas of historic literature, representing life and growth in most cases. It is the elaborate flourishes of the tree’s branches that make this artwork so memorable, and many unfamiliar with much of this artist’s work still can instantly recognise The Tree of Life.

Water Serpents by Gustav Klimt is sometimes mistakenly termed “Water Snakes” or “Sea Serpents”. The popularity of both Water Serpents paintings is due to the great detail and colour that he put into both and the flattering and feminine finish to each portrait. There is a mystical and charming set of imagery within both paintings and the great level of detail means they hold longevity too. The use of colour while portraying the two women intertwined into each other adds to its magnificence and also brings out the element of eroticism that Klimt’s paintings have been known for. 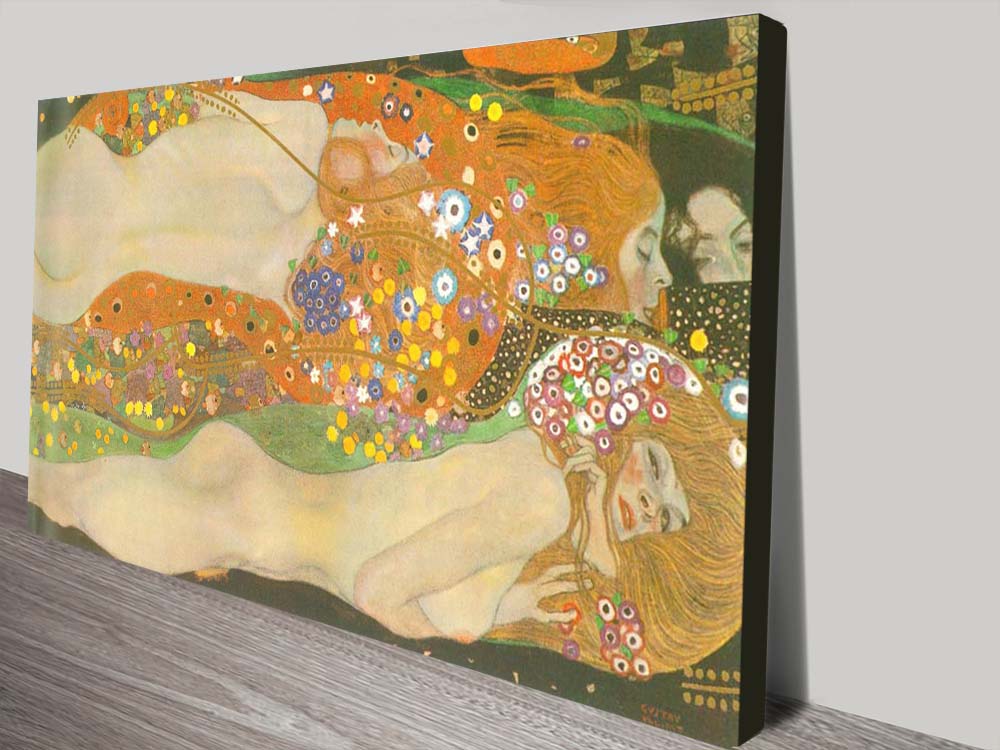 Gustav Klimt’s Birch Forest incorporates the natural styles of the scenery through classic landscape oil on canvas paintings. This pointillistic depiction of a beech forest almost looks alive. These pieces, however, incorporate the artist’s classic styles and brushstrokes that make the painting come alive. Vertical trees fill the landscape, deepening the background to create a 3D painting instead of a flat surface. The birch tree fills the palette, scattered across in thick bunches and a few skinny trees. The white trunks stand as the central image of the painting, however, outstrip into the leaves in the canopy above. A few trees in the painting are stripped from the white birch to a dark barked tree

Rich in vibrant greens and thick paintbrushes, Avenue of Schloss Kammer Park tells a story of afternoon walks and history. The path leads to a charming yellow house, and it is painted on a perfect square. Besides his figure paintings, Gustav Klimt was also inspired by the beautiful outdoors. It’s a painting that feels as though you could step right inside and take a stroll along the avenue, with grand trees on each side forming a canopy. 9. The Sunflower 1907
This piece hearkens to Van Gogh’s work, and it is unique in its portrayal of a flower in an anthropomorphic way. The Sunflower was painted in 1907. The technique that he used was oil on canvas. Klimt’s art was incredibly decorative and very different from the art that was being produced in Europe at that time. What we see is an incredibly tall sunflower with a thick, luscious, green stalk with many leaves. Bright flowers can be seen poking through the grass underneath, that help to both define and give depth to this majestic sunflower.

Colourful shades of red, green, and blue seize the surface on the canvas as poppies flourish within the painting. Poppy Field by Gustav Klimt showcases the artist’s brief transition into impressionism while incorporating traditional realist techniques within his work. The piece manifests a wide meadow, flowing into a horizon covered in blossoms. The painting carries the illusion of depth and a landscape that deepens. The artist worked to achieve this detail through the use of simple vertical brush strokes. A greenfield, covered in shades of dark green and glimpse of blue, seizes the beginning of the piece. The prominent focal point of the painting remains to be the blood-red poppies spread across the plain, another signature element Klimt painted within his work, alongside the red apple trees. The artist accentuates element within his work through bright colours to fill the canvas. The colour scheme that fills the painting are shades of green, with pops of bright colours to add contrast. 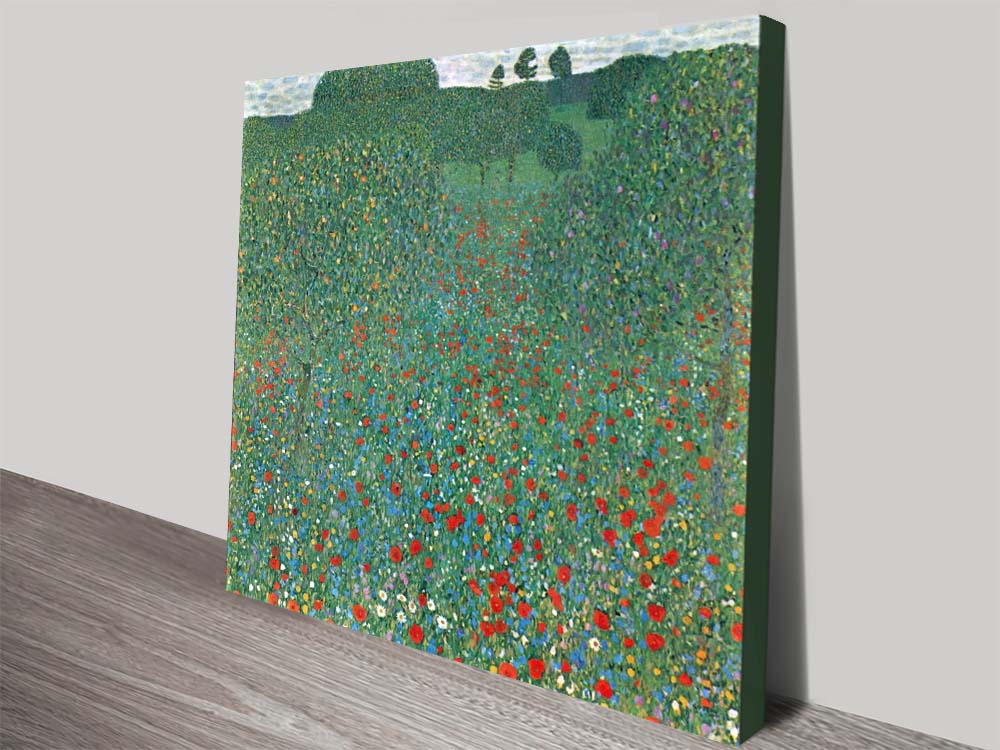