We give you the lowdown on three international street artists that are truly transfiguring the walls of New York City.

A stunning amalgamation of stencils and brushwork, symbols from her native Tokyo, contemporary New York pop culture, sex, love and life, in one big jumble fusing East and West, high- and low-brow.

In a male-dominated scene, Lady AIKO’s work stands out as being distinctly feminine. Maybe it’s the Hello Kitty imagery, the pink white purple colour scheme or the ironic references to pornography. Her works adds a refreshing blast of colour to the city.

Lady AIKO’s pictures pile up layers of images in dense mixed media collages, somewhat resembling decaying billboards. But the fragments are pulled from different times and places than you would expect to find together: Roy Lichtenstein’s pop art, Japanese wood prints, at once unique and personal.

Since making a cameo in Banksy’s film Exit Through the Gift Shop, AIKO’s profile has risen dramatically, with her work appearing in exhibitions worldwide. But that’s just one facet of her art, and she’s just as at home painting the streets as making prints. Her huge mural on the Bowery Wall in Manhattan is testament to that fact. It’s called Here’s Fun for Everyone, and it rocks!

Italian street artist Federico Massa has been rocking Brooklyn with his Mexican-tinged murals for a couple of years now. His colourful and detailed paintings have a surreal, crazy dimension, their grinning faces sporting ‘stick on’ smiles that could just as easily be grimaces.

The city itself is Massa’s muse, and he cites greater support and acceptance of his work in New York as his main reason for leaving Milan. Pieces to look out for in Brooklyn are a giant iguana being ridden by a deranged cowboy in the Bushwick area, and a whale surrounded by tentacles between Myrtle Avenue and Evergreen Street.

Massa’s work cannot just be seen from the pavement. His experimental paintings and sculpture have infiltrated galleries across Europe, and he has also collaborated with fashion designer Mark Jacobs on customised graffiti-style bags. As Massa himself says, collaboration is key:

“I like to work with different materials and ideas. I’ve collaborated with poets and sculptors, and I look forward to more such collaborations. I’m also always seeking huge walls. They inspire me!”

We hope to see more of him soon! 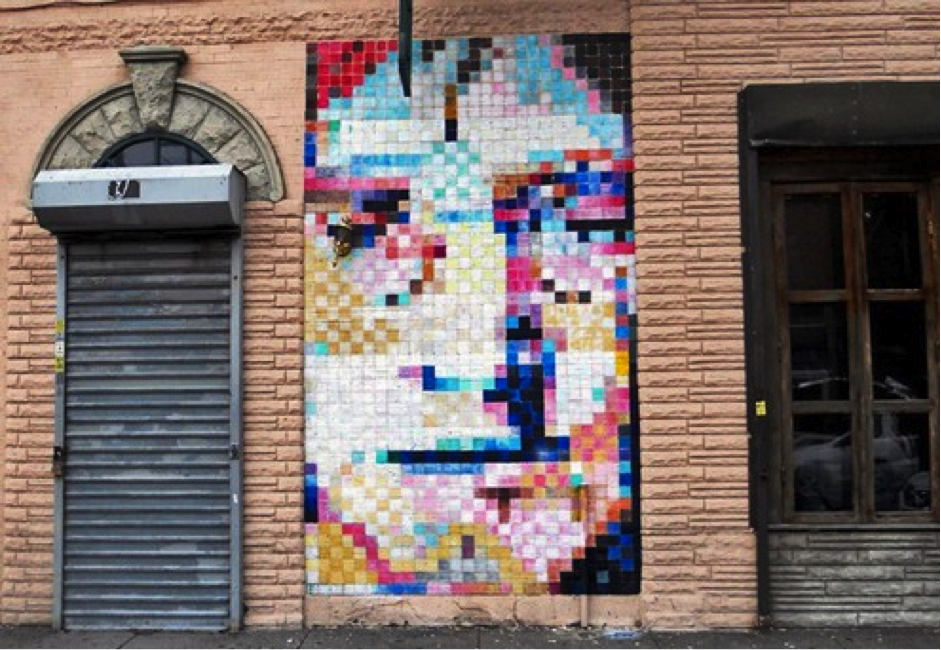 Another artist with a strong Central American influence is Guatemalan expat Juan Carlos Pinto. He describes Brooklyn as ‘the Paris of 100 some years ago,” a hive of buzzing creativity and inspiration. Pinto sees street art as a way of spreading his environmental message and encouraging people to recycle. Street art’s ability to affect change is why it’s more important for him than exhibiting work in a gallery:

Pinto works in a far-reaching range of media – from mosaic to stencils to wood and abstract painting. He regularly uses found materials like broken tiles, recycled plastic and MetroCards – somewhat refreshing in a world where we don’t think twice about throwing away a coffee cup or an unused napkin.

The MetroCard art started as a protest against the rail network when they put their fares up. Pinto started by surreptitiously replacing adverts in train windows with his own posters fighting the increase. But the project soon transformed into something much bigger.

The goal of educating people and spreading a message cuts right to the heart of Pinto’s work. Look out for this wall-sized Lennon mosaic in Brooklyn!

Visitors to the city should check out HotelClub.com where you can book and compare hip New York City hotels at discounted rates.