Salvador Dalí was born in 1904 and died in 1989. He was a Spanish artist who is famous for his art in the genre of Surrealism, an influential 20th century movement. Surrealist artists reject the rational in art; and instead aim to channel the unconscious to unlock the power of imagination. Dali extensively used symbolism throughout his work. Recurring images in his paintings include ants, thought to be his symbol for decay and death; and melting watches, perhaps symbolic of non-linear human perception of time. Though he was expelled from the Surrealist movement due to clashes with its members, Dali became the most influential Surrealist artist. Here are the 10 most famous paintings of Salvador Dali including The Persistence of Memory, Galatea of the Spheres and The Great Masturbator. 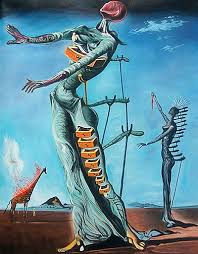 The Burning Giraffeis seen as an expression of the personal struggle of Salvador Dali with the civil war going on in his home country. The painting depicts two feminine figures with undefined phallic shapes protruding from their backs. The hands, forearms and face of the nearest figure are stripped down to the muscular tissue beneath the skin. There are opened drawers coming out of the left leg and chest of the figurine. Salvador Dali admired Sigmund Freud and several paintings of Dali were influenced by Freudian theories. These open drawers can be traced to Freud’s method and refer to the inner, subconscious within man. The burning giraffe image in the background was described by Dali as “the masculine cosmic apocalyptic monster.” He believed it to be a premonition of war.

This painting was created at the end of his career and is considered to be his last great masterpiece. Dali spent two summers creating the artwork in which he used surrealism, Pop Art, Pointillism, geometrical abstraction and psychedelic art. Tuna Fishinguses images from ancient Greek sculpture to modern cinema, and depicts the violent struggle between men and large fishes as a personification of the limited universe. The painting is dedicated to Jean Louis Ernest Meissonier, a 19th century French painter known for his battle scenes. Dali considered Tuna Fishing to be his most ambitious work and it is considered by his fans a testament to the mastery he had acquired during his career.

This painting shows the sleeping figure of the artist’s wife Gala Dali floating above a rock. Beside her naked body, two drops of water, a pomegranate and a bee are also airborne. Gala’s dream is prompted by the buzzing of the bee and is portrayed in the top half of the canvas. In a succession of images, a pomegranate bursts open to release a giant red fish from whose mouth two ferocious tigers emerge together with a bayonet which will soon wake Gala from her restful sleep. 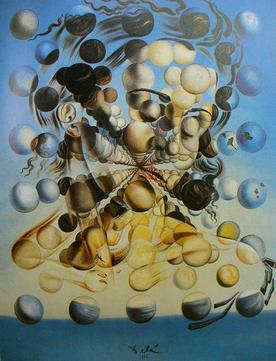 After Hiroshima and Nagasaki were bombed in World War Two, Salvador Dali became fascinated by nuclear physics and the theories of disintegration of the atom. It was also a time when he had renewed interest in Catholicism. This became his Nuclear Mysticism period,when his works often used ideas from modern science as a means of rationalizing the Christian religion. Realizing that matter was made up of atoms, Dali made his works appear to disintegrate into multiple atoms. This painting is a portrait of Gala Dali, his wife and muse. Her face is composed of densely populated spheres, representing atomic particles, which give a marvelous three dimensional effect to the canvas.

The paranoiac-critical method is a technique in Surrealism which was developed by Salvador Dali in the early 1930s. He used this to tap into his subconscious through systematic irrational thought and a self-induced paranoid state. Considered one of the main achievements of surrealism, Dali used it in paintings, especially those involving optical illusions and other multiple images. According to Greek mythology, Narcissus, who was renowned for his beauty, fell in love with his own reflection in water. Dali’s interpretation of the Greek myth, this painting shows Narcissus sitting in a pool, gazing down.

This painting is known as Christ of Saint John of the Crossbecause its design is based on a drawing by the 16th-century Spanish friar “John of the Cross”. The composition consists of a triangle, which is formed by the arms of Christ and the horizontal of the cross; and a circle, which is formed by the head of Christ. The triangle might be seen as a reference to the Holy Trinity while the circle may represent unity, that is all things exist in the three. Although the painting is a representation of crucifixion, it is devoid of nails and blood. 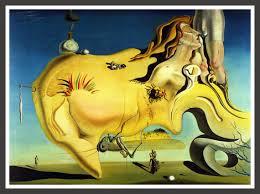 In 1929, Salvador Dali met Gala, who became his muse and later his wife. This canvas was created that same year and is thought to reflect the erotic transformation that the artist underwent due to her arrival in his life. The main area in the painting represents the artist himself sleeping. Out of his head comes the vision, probably representing a fantasy, of a nude female figure, resembling his muse, drawn to the genitalia of a man, presumably the artist. Seen by many as a bizarre self-portrait, the disturbing composition is further plagued by additions like the fish-hook, the bleeding cuts, ants crawling on his face and a grasshopper which has attached itself to his face.

Salvador Dali painted this masterpiece six months before the Spanish Civil War began. He claimed to have been aware of the war due to “the prophetic power of his subconscious mind”. The painting reflects his anxiety during the time and predicts the horror and violence in the war. It portrays two bodies, one darker than the other, in a gruesome fight where neither appears to be a victor. The monstrous creature is self-destructive just as a civil war is. Dali made sure the painting looked very realistic despite the fantastical creature it depicts. The boiled beans in the painting, which are also mentioned in the title, are perhaps a reference to the simple stew that was eaten by the poor citizens living through a difficult time in Spain. Soft Construction with Boiled Beans is considered one of Dali’s greatest masterpieces and is renowned for brilliant use of surrealism to depict the horrors of war. 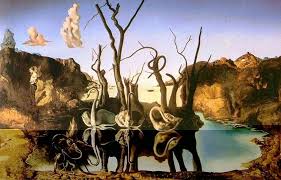 Double images were a major part of Dali’s paranoiac-critical method. Like in Metamorphosis of Narcissus, this painting uses the reflection in a lake to create a double image. The three swans in front of the trees are reflected in the lake so that their necks become the elephants’ trunks and the trees become the legs of the elephants. The landscape contrasts with the stillness of the lake as Dali has used swirl-like images to depict the background cliffs and skies. Swans Reflecting Elephantsis considered a landmark painting in Surrealism as it enhanced the popularity of the double-image style. It is the most famous double image created by Salvador Dali; his greatest masterpiece using the paranoiac-critical method; and one of the most well-known works in Surrealism.

This iconic and much-reproduced painting depicts a scene with watches melting slowly on rocks and the branch of a tree, with the ocean as a backdrop. Dali uses the concept of hard and soft in this painting. This concept may be illustrated in a number of ways like the human mind moving from the softness of sleep to the hardness of reality. The Persistence of Memory has been much analyzed over the years as Dali never explained his work. The melting watches have been thought to be an unconscious symbol of the relativity of space and time; as a symbol of mortality with the ants surrounding the watches representing decay; and as irrationality of dreams. It is not only the most famous painting of Salvador Dali but also the most renowned artwork in Surrealism.