Our pick for the artist of the week for the Blue Horizon Prints spotlight is a very talented Japanese Artist specialising in quirky Anime / Manga Cartoon style Pop Art, its bright, it’s cheerful, it’s colourful and screams Japanese!

You can browse our stunning collection of Takashi Murakami prints here.

Takashi Murakami is a Japanese artist seen as one of the greatest as a result of his innovation and creativity in the business of Art. He is revered for being able to blur the boundary between fine and commercial art. His world is very popular and the fame is not even restricted to only the art world. Most times, he is seen in the same light as some of the greatest artists working in the tradition of Pop Art, like Andy Warhol, Damien Hirst, and Jeff Koons.

Murakami has been able to match classical Japanese art with contemporary Japanese pop culture with an amazing technique known as “superflat” that is synonymous to Murakami as a result of the amazing way he was able to execute it beautifully and that has made him a house name.

Takashi Murakami was born and trained in Tokyo and his interest in anime and manga had always been evident even in his early life and this affected his works later on. He planned to work in the animation industry. He went to the Tokyo University of Arts where he acquired the drafting skills that was needed eventually for him to be an animator. He later majored in Nihonga which is the conventional method of Japanese painting that uses traditional Japanese artistic conventions, techniques and subjects.

He felt there was something more than the contemporary art in Japan because it felt like they were just copying the Europeans. This reflected in his early work which was more of social criticism and satire. This produced works such as performance art (Osaka Mixer Project, 1992), parodies of the “message” art popular in Japan in the early 90s, (Dobozite Dobozite Oshamanbe, 1993), and conceptual works (e.g. Randoseru Project, 1991).

Around this time, he started developing his own pop icon which he called “Mr DOB,” and he eventually made it a form of self-portraiture which was just the first of several consistent morphing and recurring motifs displayed all through his work. He eventually became popular but his works were initially treated with disdain in Japan.

Murakami had always had issues with the absence of an art market that is thriving after the war in Japan and he was determined to change this. He did this by formulating a strategy in which he first establishes himself in the Western art world before eventually coming back to Japan to show them what they have been missing and built a new type of art market in the process.

His plan was to create something that will be acceptable in his native Japan and yet have international relevance. This led him to a focus on Japan’s ‘low’ culture, particularly anime and manga, and the larger subculture of otaku. He derived an artistic style and motifs from this strategy which was demonstrated in his whimsical Cosmos Ball from 2000, in the collection of the Honolulu Museum of Art.

He published his work on Superflat theory in 2000 in the catalogue for a group exhibition of the same name curated by himself for the Museum of Contemporary Art, Los Angeles. The takeaway from the theory is that there is a legacy of flat, 2-dimensional imagery from Japanese art history in manga and anime. What makes the style different from what was obtainable in the western style is that its emphasis is on surface and use of flat planes of colour. The theory served as a basis for his works and this was exemplified by the exhibitions “Coloriage” (2002, Fondation Cartier pour l’art contemporain, Paris) and “Little Boy: The Arts of Japan’s Exploding Subculture”. The effect of his work was truly remarkable and it gave Japan’s an international exposure that was unprecedented.

In consonance with his concept of Superflat Murakami repackages elements considered “low” or subcultural showcases them in the “high-art” market. This was not all, he further evened the playing field by repackaging his “high-art” works as merchandise, such as plush toys and T-shirts and this made them cheaper and affordable. 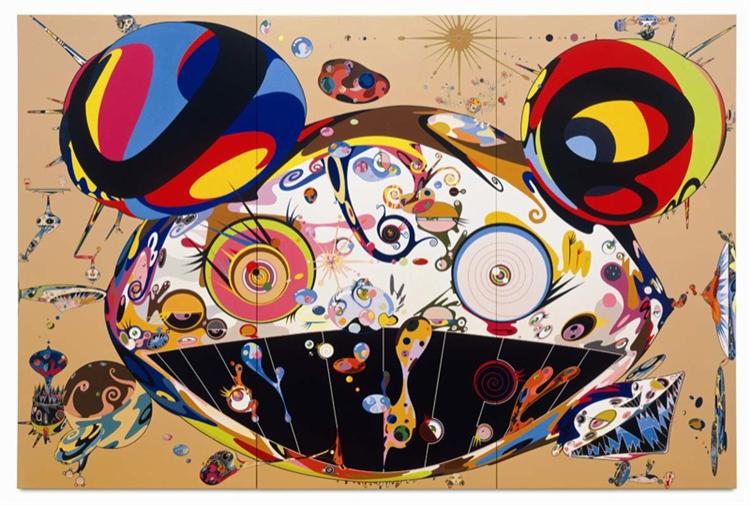 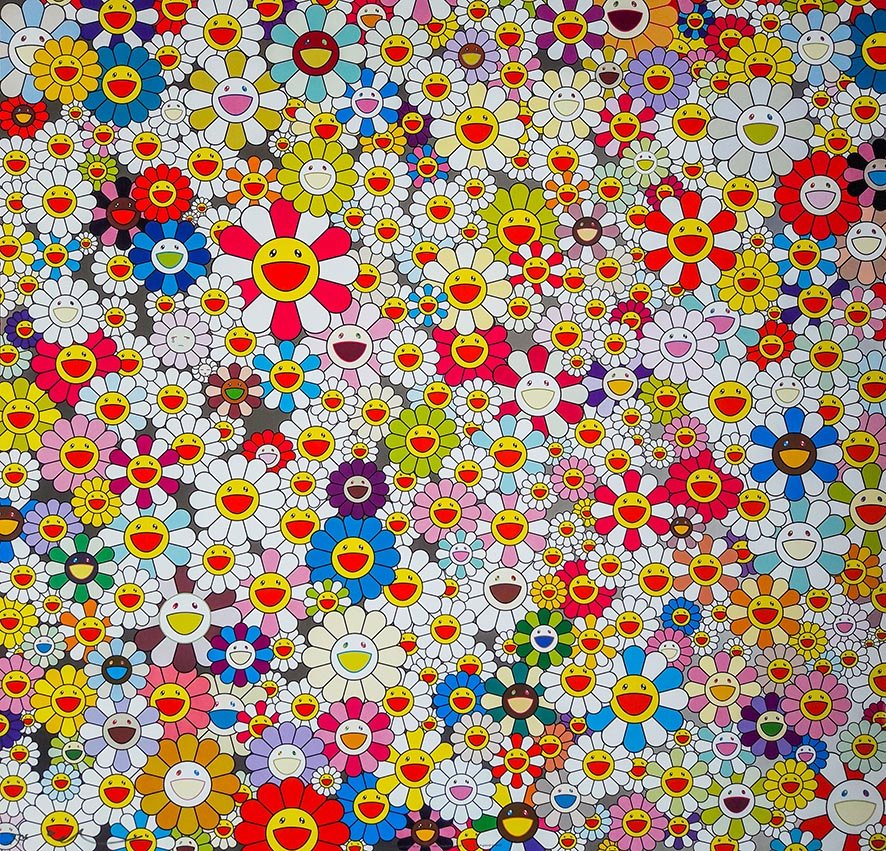 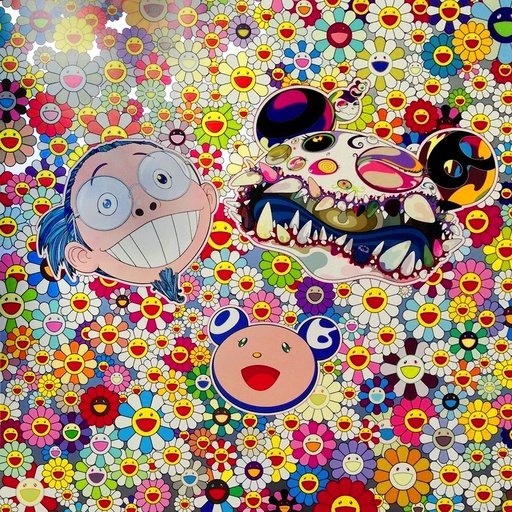 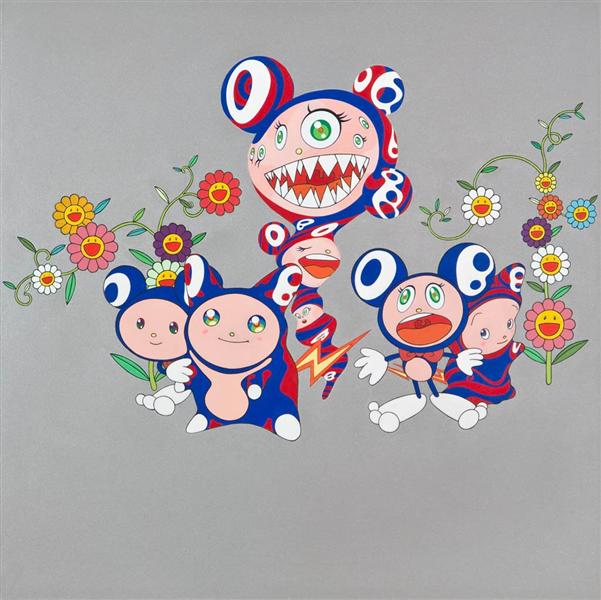 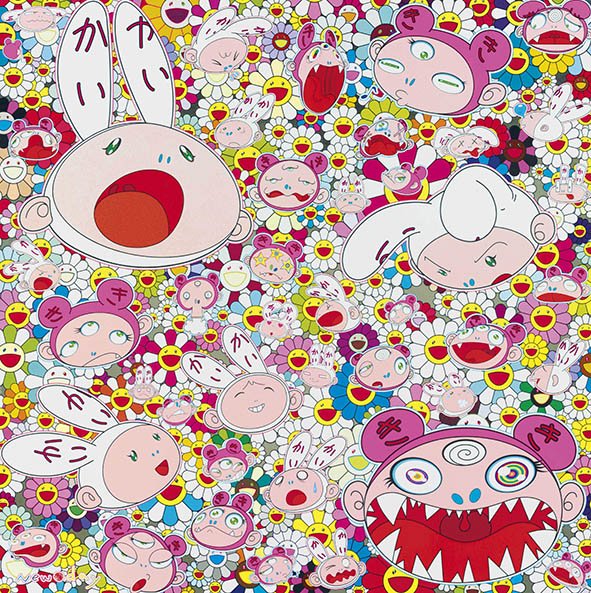 Murakami worked with several other artists and this began in 2002 when he invited designer Marc Jacobs when he began his long-term relationship with the fashion brand Louis Vuitton. This started through his contribution to artwork which was used in the design of a series of handbags. The series was a huge commercial success and changed the company’s monogram. Murakami had initially worked with fashion designers such as Issey Miyake Men by Naoki Takizawa but it was his work with Louis Vuitton that made him famous for blurring the line between ‘high art’ and commercialism. This was also the major factor that made his work accepted and made him a celebrity in Japan.

He later re-appropriated his works on Graduation and “Good Morning” by adding their imagery into his paintings and sculptures which further led to the blurring of the boundaries between art and commercial branding and even made so many people began to question if such boundary ever existed in the first place. His collaborations were not just international, he also worked with various creators and industries in Japan. A very good example of such is the image characters he produced for the press relations campaign of the major urban real estate development Roppongi Hills.

Music producer Pharrell Williams unveiled a collaborative sculpture of Takashi Murakami Pop Art at Art Basel in 2009 which Williams stated: “illustrates the metaphor of value.” Pharrell and KZ of Livetune, Murakami created a music video for the remix of the Hatsune Miku song “Last Night, Good Night (Re:Dialed)” in May 2014. It was the YouTube channel The Creators Project that assembled the team, headed by Vice and Intel. Murakami’s anime-inspired illustrations from his first film Jellyfish Eyes in the same year.

By and large, Murakami is indeed a great artist whose works speak volumes both in the local and international scene and we’re excited to see where this artists artistic evolution will go to.

Buying modern art is fun but not always easy because there are different styles to choose from together with individual pieces from artists that are following no style at all. As with anything, if you are a complete novice when it comes to modern art you probably don’t know the different styles that are out… END_OF_DOCUMENT_TOKEN_TO_BE_REPLACED

Here at Blue Horizon Prints we have a reputation for premium quality canvas prints and photos on canvas, when our customers buy from us they know that they will receive a piece of high quality art that has been hand made in Australia using the very best quality materials, inks and printers. We make this… END_OF_DOCUMENT_TOKEN_TO_BE_REPLACED

It can sometimes be difficult to find the right present to give to a friend or family member.  After all, how many neckties or handkerchiefs can you give Granddad, or how pleased will your best friend be at receiving yet another sweater?  When it’s time to pick out the perfect present and all the old… END_OF_DOCUMENT_TOKEN_TO_BE_REPLACED

Personalise Your Home with Canvas Prints That You Order Online All of us want to make our homes as comfortable and individual as possible, and one of the best was to achieve this is by the use of artwork. When we’re at home, we can really relax and be ourselves, and the decoration we choose… END_OF_DOCUMENT_TOKEN_TO_BE_REPLACED

Pop art is still popular, since its introduction decades ago, because it is so very bright and cheerful. The combination of simple areas of colour with contrasting hues or black and white images can create pop art canvas prints from your own photos. Blue Horizon Prints makes it fun and easy to turn your favorite… END_OF_DOCUMENT_TOKEN_TO_BE_REPLACED