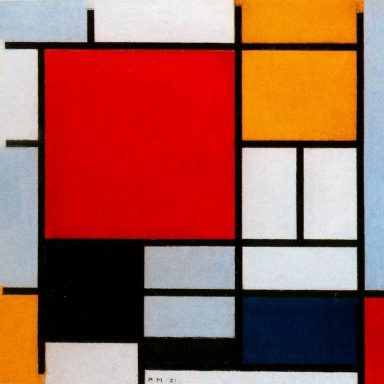 Pieter Mondriaan, (later Piet Mondrian) was a Dutch painter born on the 7th of March 1872. He is widely regarded as one of the best artists of the 20th century and is also known for being a pioneer in the field of abstract art. He eventually died of pneumonia on the 1st of February 1944 in Brooklyn, New York. His style evolved from a traditional style to an abstract style.

His ten most famous paintings are as below:

Composition No. 10 (Pier and Ocean) (1915): Mondrian was influenced by the “Cubism” art movement when he created this piece. His interest in this style is said to have extended from 1912 until 1917. During this time, he created the Pier and Ocean Series. The shown piece is the most significant in the series.

The Gray Tree (1912): Mondrian created this painting during his initial experimentation with Cubism. It is one of his most famous works as it ushered in the beginning of his fascination with Abstractism. 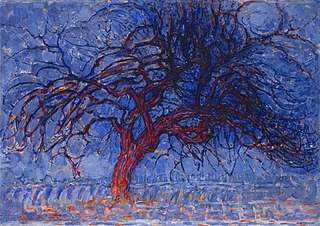 The Red Tree (1908-1910): During his Luminist phase, Mondrian followed conventions and created this piece. This painting is Mondrian’s most famous painting of his Luminism phase. By balancing the colours, Mondrian attempted to recreate the balance of nature.

New York City I: (1942): This painting was influenced by Mondrian’s immigration to the United States, during the Second World War. His “American Phase” involved the use of double lines and the disposal of black lines in favour of vibrant, coloured bands. This phase continued until his death.

Composition with Red Yellow and Blue (1937-1942): The painting acts as a representation of the peak of Mondrian’s black line based abstractism before he began to substitute the black lines for more vibrant, coloured bands.

Composition II in Red, Blue, and Yellow (1930): This piece is one of Mondrian’s most celebrated works because it illustrated the time at which his brand of abstractism had reached its most fundamental form. Taking on a very sombre and pure appearance.

Tableau I: Lozenge with Four Lines and Gray (1921): Mondrian created his Lozenge paintings during the mid-1920s, in an effort to add more dynamics to his abstract work. The reason they are named as such is that they are shaped like diamonds and would require a regular square canvas to be tilted, to show it correctly. 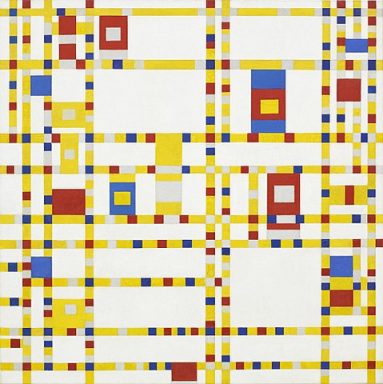 Composition with Large Red Plane, Yellow, Black, Gray, and Blue (1921): Mondrian was best known for his neoplasticism, which caused him to simplify the visual structure of his paintings to create an amalgamation of straight lines and the primary colours whilst, also, implementing the neutral shades of white, black and grey.

Victory Boogie Woogie (1944): This was the last painting ever created by Mondrian and it was left unfinished upon his death. Its bright and vibrant nature was reflective of Mondrian’s expectation for the Allies to win the Second World War.

Broadway Boogie Woogie (1942-1943): This painting was heavily influenced by Mondrian’s fondness for Broadway Boogie Woogie music, lending to his time in Brooklyn, New York. The structure of the painting is based on Manhattan, New York’s city grid. The abstract innovation in this piece has led it to become one of the most important artworks in the style of abstract, geometric paintings.