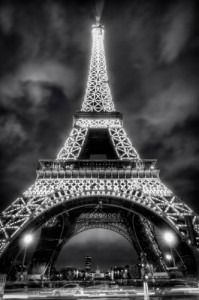 There is resurgence in the popularity of black and white photography. The crisp and clean tones with its patterns, shapes and lines appeal to many keen photographers, art lovers and home owners alike. Black and white goes back to the very origins of photography; it is honest and true to itself. No flashy jazzed up colors to get in the way and delude the eye. It’s art in all of its glory, plain and simple. From the deep dark richest blacks to the crisp clean clear whites, it tells a story that begs the eye to draw in closer and discover the real story beneath the surface.

This is the way photography began in its true form before the invent of colour images. These prints with their moody grays and soulful off whites are a reminder of what a great print should look like. Before the gaudy mistress of colour came into the affray this is what photographers used to convey emotion and feelings. Nowadays we see a bright blue and white clouds and miss textures and emotions, light and the absence of light that this photo would have conveyed had it been in black and white.

It has been said that there is something profoundly sexy about black and white photography that you just can’t get from colour. I firmly believe that this is true. Once you remove the color from a photo it is like stripping a scene down to the bare bones removing the layers and textures and leaving just the form.

What exactly is Black & white photography?

Early plates and films had limited sensitivity to longer (red) wavelengths of light and produce a certain interpretation of the subject, later films had a much more even response to colours  (panchromatic) that led to a different look altogether. The differing chemistry and manufacturing processes used by various manufacturers resulted in different films producing subtly different renditions of the same scene. These small nuances were often unique to particular manufacturers and gave great character to the finished work.

It was however quickly discovered that adding a coloured filter in front of the lens caused a big change in the overall look of the image. An example would be that by adding a red filter to a photograph of the sky cut out some of the blue light while letting in the red component of the white light from the clouds. This resulted in the image displaying darker skies which added emphasis to the clouds giving them texture and depth. Other more complex uses of coloured filters allowed equally stunning changes to be made with the tones of human skin and flowers. Each photograph would vary depending on what film was used, what filters and where the image was developed.

The art of taking a good black and white photo is to learn to see the world without colour. They have trained their mind to pick up contrast and tone while blocking out distracting colours around them. This isn’t a skill that you can pick up in a short amount of time and comes with a great deal of practice. One of the great things about digital photography is that you can take as many photos as you like then delete at will. Dont be afraid to experiment.

Focus on the contrast

Black & white photography is about the black, the white, and all the tones in between. The human eye is built to pick up two things: light intensity and color. When you remove the color, your eyes become much more sensitive to the intensity of the light. Our eyes naturally pick out areas of contrast; its how we determine what objects are. As a monochromatic photographer, your ultimate objective is to convey a point using shades of gray. Use contrast to demonstrate whats important and what not. Learn to seek out scenes that display signs of high contrast naturally, this way your black & white photos will be more compelling immediately.

When processing a black & white image after it has been taken, the use of Photoshop techniques such as levels, curves, and layer blends give you a wide variety of output options. Photoshop will also let you add any filters that you would have ever dreamed if using with a camera before.

Pay attention to the texture

Texture is really just another form of contrast however it is perceived very differently. In reality texture is the regular or irregular (as the case maybe) pattern of shadows and highlights at various intensities. Black & white photography really lends itself to texture because colour generally adds another layer of complexity, therefore masking the most subtle textures. In black and white these distractions are stripped away. Art is all about textures and form.

Capture the image in colour

As mentioned earlier, many cameras allow shooting in black and white however If your camera gives you the option of shooting in color or black & white, however you should always avoid this as you are losing a great deal of what black and white photography is all about. The camera is really capturing colour, then converting it into black & white. Photoshop (or similar) can do a much better job of this colour conversion, in addition to adding a great deal more flexibility on the output of the final image. Its astonishing how different a photo can look solely based on the post-processing phase; therefore it makes sense not to limit you before the photo even makes it out of the camera.

Black & white film photographers make use of colour filters to change the tones in their photographs. Most black and white images that you see have used filters to achieve effects such as a dark sky with puffy white clouds.

Although decreasingly common, using a colour filter with a digital camera is perfectly acceptable and at times has definite benefits however it is no longer necessary. Digital software such as Photoshop has the ability to apply non-destructive color filters. These filters will produce the same filter effect with as click of a few buttons. Isnt technology great!