Born into a family of modest means, Renoir was apprenticed to a decorator of fine porcelain. Although he soon resolved to become a painter, he always remained attached to the artisanal tradition, and to the end of his life he identified himself as a “painter-worker.” Having met Monet and Sisley in the studio of the academic painter Marc Gabriel Gleyre, where many of the future Impressionists studied, he exhibited for the first time at the Salon of 1864 and tried to make a living as a portraitist. At the same time, he began to work in the open in the Forest of Fontainebleau, but he never ceased to admire the masterpieces in the Louvre.

In 1869, at Monet’s urging, the two artists began to paint at La Grenouillere, a fashionable restaurant on the banks of the Seine near Paris. Thereafter they often worked together, painting the same motif side by side, and together they made an important breakthrough in their technique. Using rapid brushstrokes of brilliant hue, they evoked the reflections of the water and the sky, portraying the optical effects of what they were painting.

Without money for travel, Renoir was forced to spend most of his time in Paris. However, he enjoyed the city’s animation, its elegant women, and its cafes frequented by artists and writers. In April 1874, he took part in the first Impressionist exhibition with The Loge, his first painting of the world of the theatre. 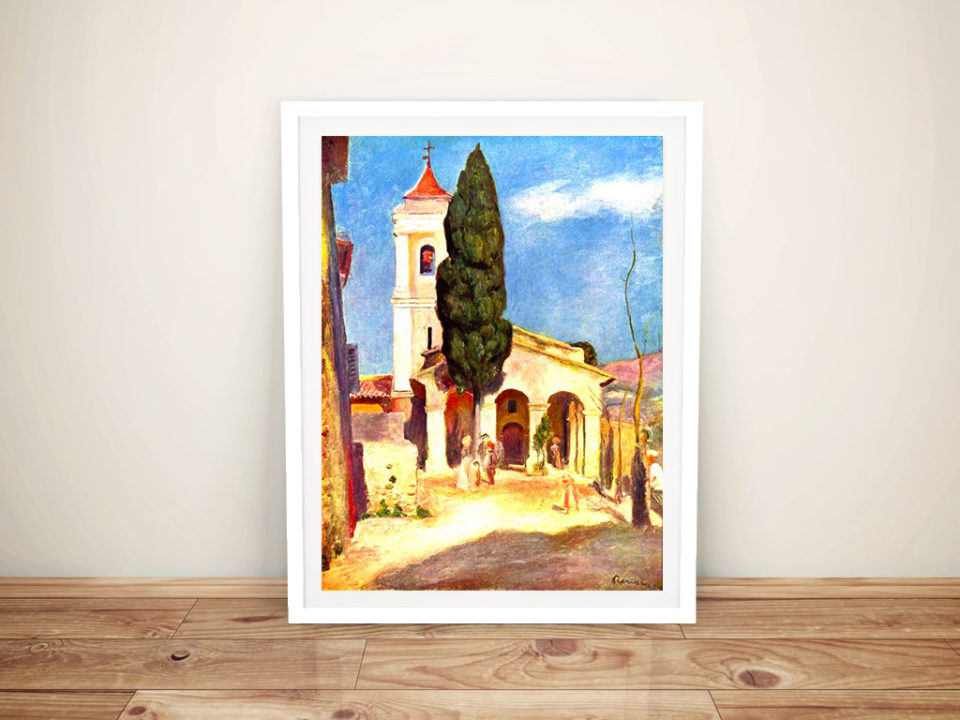 In 1876 Renoir settled in Montmartre, where he often painted his garden, and he also took his easel to the Moulin de la Galette, a bustling outdoor cafe close to his home, where he socialized with his painter friends. He also cultivated a network of friendships in the world of society, which sustained his career as a portraitist, and allowed him at last to lead a comfortable life.

In 1882 Renoir was able to realize his dream of travelling to Italy to study the art of the Renaissance, and to North Africa, to see its brilliant light. These two trips prompted him to question the tenets of Impressionism and attach increasing importance to traditional craftsmanship. As time went on his brushwork became softer and more delicate, and he began to favour soft pinks in his palette. His favourite subjects were female figures, whether in portraits (Young Girls at the Piano) or depictions of nudes in landscape surroundings, which he called “my nymphs.”

In 1903 he settled definitively in Cagnes-sur-Mer, near Nice in southern France. Despite the onset of paralysis in his hands, he never stopped painting large nudes, powerful and magnificent figures rendered in intense, sparkling colours. These large canvases express his ongoing love affair with the female body, as well as the irrepressible vitality of his appreciation for the visible world.

This article is courtesy of ‘The beginner’s guide to Art’, translated from French by John Goodman, edited by Brigitte Govignon.  The article was brought to you by Blue Horizon Prints, experts in premium quality canvas prints at affordable prices.