Street art is becoming a more and more popular art form, and so more and more street artists are emerging every day. Here is a list of the top street artists that are sure to blow your mind with their impressive and meaningful pieces of street art. We collated a list of Our Top 10 Street Artists and where to find them, it’s by no means definitive and naturally will change soon as more artworks are created by these talented artists.

Lee Quiñones is often considered the most influential graffiti artist from the New York City Subway Graffiti Movement. His pieces are often explosive in style, with plenty to take in.

His art also often features political and poetic messages, one of his most famous quotes being: ‘graffiti is art and if art is a crime, please God, forgive me’.

Much like many other street artists, Blu conceals his true identity, going only by his pseudonym. What we do know though is that he was born in Senigallia in Italy, and now lives in Bologna.

Blu paints large murals, which often have an undertone of sarcasm, and resemble comic and video game graphic styles. This is a style he developed after switching from using spray paint, to using house paint.

Seen UA, or Richard Mirando, first started to paint on the New York City Subway system, at the young age of 12. He gained a reputation for painting whole cars from top to bottom with colourful graffiti images.

Seen UA not only created incredible street art and graffiti pieces, he also produced work on canvas. This work appeared in exhibitions alongside the works of similar artist Lee Quiñones and famous Andy Warhol.

Sandra Fabara goes by the tag name of Lady Pink and creates colourful street art with empowering messages for women. In 1979 she became well known as the only real female competition for male street artists, and now she uses her art to fight for equality, justice and women’s rights.

Vhils is a popular street artist in Europe, he first started out in Lisbon, where he would graffiti the suburban train lines. As his style grew though, he expanded and began to paint train lines in many different European cities.

Their street art began with spray painting graffiti art in 1987, but they soon gained recognition and actually helped to define Brazilian street art styles. Their style is a mixture of traditional hip-hop styles and Brazilian culture.

Now the two are known and appreciated worldwide, and they have even been commissioned for various public works.

Xavier Prou is a well-known street artist, who works under a pseudonym just as creative as some of his work. He took his pseudonym Blek Le Rat from the cartoon Blek Le Roc, replacing Roc with Rat, rat being an anagram for art. The rat was an animal that he saw to be completely free, and just as the rat spread the plague, he planned to spread street art everywhere.

He was also one of the first graffiti artists in Paris and is often referred to as the father of stencil graffiti.

Blek’s work focuses on social awareness and opposes oppression. His desire to make art available and visible to people from all walks of life is also evident in his persistence to spread his love of street art.

Eduardo Kobra became one of the most popular street artists in the 1990s, his colourful, kaleidoscope street art lighting up urban scenes. He brings notable figures to life in realistic paintings but uses bold lines and bright colours to create an effective contrast with the often dull urban surroundings. 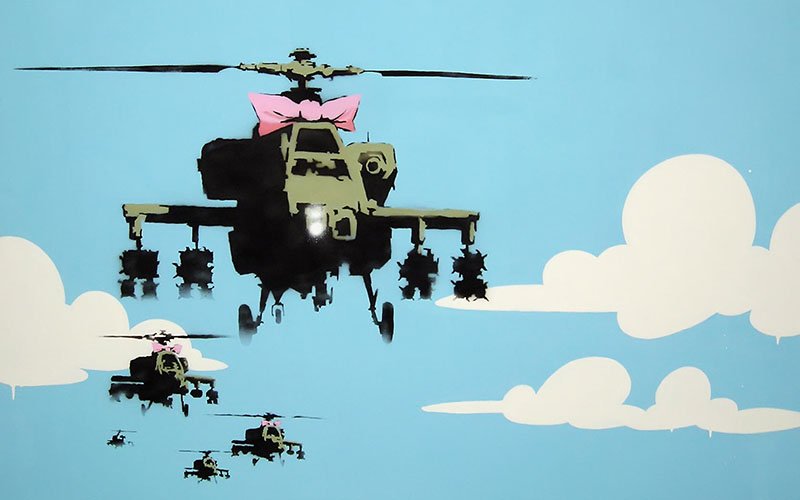 Banksy is a hugely famous, England-based graffiti artist, who has managed to remain until very recently anonymous. Much like Blek Le Rat, he uses a distinctive stencilling technique to create impressive and powerful of often politically charged graffiti images.

Banksy is not only a street artist but a political activist, many of his pieces of art spreading a political message. His art and his slogans are often anti-establishment, anti-capitalism, or anti-war.

Tristan Eaton became involved with street art as a teenager, painting everything and anything he could. Since then, he’s become a globally recognised street artist, illustrator and toy designer.

His goal is to make art available to those who can’t afford to enter the elitist world of fine art, and so he creates detailed and impressive street art and murals, diversifying and brightening neighbourhoods.

Even his toys are based on the work of graffiti artists, and the hip-hop culture. And through his toys, Tristan helps makes art available to the masses, including the little ones.