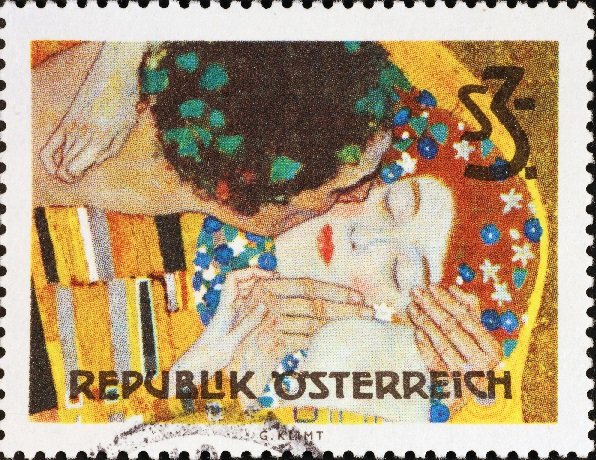 The artwork that you hang on your wall should be thought out and meaningful.

There’s not a lot of conversation that can rise out of dull art that doesn’t have any significance. If you’re ever in a pinch, it’s never a bad idea to look to the world’s greatest painters for ideas of wall art.

Gustav Klimt, an Austrian painter who was at the peak of his powers at the beginning of the 20th century, has a number of exceptional pieces to hang on any wall. Best known for is secessionist painting The Kiss, he is the figurehead of the secessionist movement.

We’ve compiled a list of five Gustav Klimt paintings you should consider hanging as your next piece of wall art.

No list of Klimt paintings would be complete without his best known work, so we’ll start with The Kiss.

The Kiss is probably the most memorable and best-known piece of Mr. Klimt’s work, making it an excellent choice to hang up. Most people won’t know the title of the work or the painter, but they will recognise the image.

2. Portrait of Adele Bloch-Bauer I

Both this painting and The Kiss are parts of Klimt’s “Golden Phase” series, and boast mesmerizing displays of gold that serve to illuminate the central figure or figures. This painting depicts the wife of one of Gustav’s biggest patrons, and was one of two paintings that the artist did of this woman.

Adele died, prompting her husband to keep Gustav’s masterpiece for himself. The painting was then confiscated by the Nazi’s. Fast forward to this millennium and the painting was bought for 135 million dollars.

Both paintings depict the same subject, and surprisingly rank one after another on the list of most expensive paintings ever bought. This one, however, was not a part of Klimt’s Golden Phase and depicts Adele amidst an interesting, collage-like arrangement of muted colours.

As with most of Klimt’s paintings, the beauty of the background is as important as the subject, somehow showing depth and continuity without the presence of any distinct objects to gauge distance by.

4. Portrait of a Lady

This work depicts a young woman in an expressive, impressionistic style. It’s not as abstract or heady as some of Klimt’s other works, but it still has a quality that expresses more than simply what is painted on the canvas.

Another interesting thing to note about this painting is that it was painted over one of the artist’s previous paintings. Portrait of a Young Lady was thought to be lost, but x-rays revealed that Klimt had simply painted over it.

With most of the painting containing an abstract representation of foliage in a park, this is a striking representation of the beauty of nature. It can be inferred that the figures in the foreground are people, but they could also be taken as trees, so it’s really up to you.

Either way, you’ll be pleased with the beauty of this painting on your wall.

Explore Your Other Options

Digging into the artwork of the world’s greatest painters will give you a lot of material to hang on your wall. Gustav Klimt paintings are certainly not all you have to choose from.

From Da Vinci to Picasso, any investment you make into great artwork is worth the money. If you’re in need of any of the world’s great artwork, we’ve got everything you need.