Street art refers to an illicit visual art developed in public spaces. It became popular in the 1980s with the rise of graffiti art. Street artists are generally associated with vandalism, political activism and antisocial behavior. This urban artwork is a powerful medium to associate with the public and a platform for the oppressed to raise their voice demanding a change. Modern forms of street art include stencil graffiti, street sculpture and sticker art.

“Graffiti is one of the few tools you have if you have almost nothing.
And even if you don’t come up with a picture to cure world poverty you can
make someone smile while they’re having a piss.” 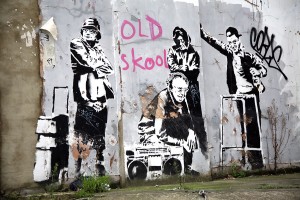 These words have been spoken by the greatest street artist of the world, Banksy. Though his real identity has been unraveled just recently, Banksy is known as a graffiti artist, film director, painter and a political activist. It is regarded that he was born in Bristol in the period of 1974. He is an epitome of satirical stencil artwork, a perfect combination of graffiti and dark humor presented in a unique way. His artwork has gained worldwide recognition; his works displayed on the walls, streets and bridges throughout the world.

Collaboration with musicians and artists has enhanced his work. Banksy’s inspiration was a graffiti artist named “3D” who laid the foundation of an English musical group called ‘Massive Attack’. The amazing artwork of Banksy is displayed on walls, props, and streets. ‘Exit Through The Gift Shop’ is a documentary film made by Banksy that talks about his passion for street art and tells viewers about the association between street art and commercial art.

“Nothing in the world is more common than unsuccessful people with talent, leave the house before you find something worth staying in for.” With these thoughts, Banksy chose the career of graffiti artwork in 1990 as one of the members of the DryBreadZ Crew in Bristol. His work was largely inspired by the talent of the local artists. Banksy’s work started generating revenue when he met with a leading photographer, Steve Lazarides, who became his agent later. Despite the fact that his initial work was freehand, to a great extent, Banksy utilized stencils now and again. Later, the artwork using stencils became his signature style, towards the end of 90’s. 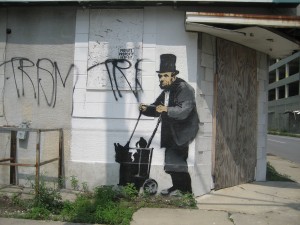 The stencil artwork included humorous pictures sometimes associated with striking slogans. The pieces of art exhibit a feeling of protest against war situations, capitalism and government. The subjects used in the artwork featured apes, rats, soldiers, policemen, the elderly and children. One his controversial but the most outstanding piece of artwork featured a live elephant painted with a pattern resembling Victorian wallpaper.

Other pieces have carried bold themes. Banksy received extensive media attention in 2005 for his painting on the barrier of the West Bank. He is popular for using patented material and sabotaging images. He used the famous series of artwork by Monet that included paintings of water lilies and introduced a new version in the market. He shifted to New York in 2013 and decided to paint a new piece every day for his residency.