If you thought being a gold digger only had one definition, then Raffi Stepanian would prove you wrong. A self-proclaimed “urban prospector”, Stepanian literally spends his days digging for gold – in the gutters of the Big Apple.

Six years ago, Raffi Stepanian was working as a stone setter. When he discovered gold scraps on the floor of a diamond exchange one day however, everything changed. He figured that if he could find gold on the floor indoors, then he could probably do the same outdoors, just a few feet away. That is when he began crawling over the sidewalks. 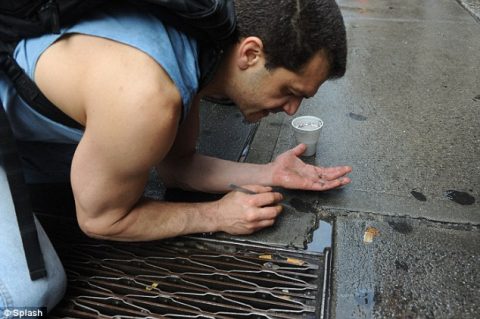 With just a simple styrofoam cup, tweezers and a butter knife, Raffi earns himself a living of hundreds of dollars per week with gold, ruby and diamond fragments dug out of New York streets.

“The percentage of gold out here on the street is greater than the amount of gold you would find in a mine” Stepanian says. “It comes close to a mother lode because in the street, you’re picking up gold left by the industry.” 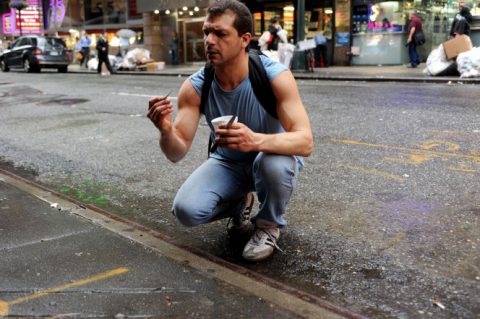 Through his daily dig, Stepanian has earned himself a well known reputation from the local diamond sellers in the area. According to The Daily Mail, Raffi earned over $800 just last week by selling gold to dealers in the city. The craziest part is probably that those leftover fragments most likely came from those dealers own purchases.

Stepanian’s finds come from multiple sources and places. Many are backs of earrings dropped on the ground, clasps from necklaces, tiny chips of platinum and gold falling off of jewellery. He told the paper that most of the time the things he finds are a result of a chain reaction – chips falling off of jewellery are dragged on the ground, stick to gum and shoes and are taken all over the city. So that gum sticking to the bottom of your shoe? It might be better than you think!

The bonus is that when he finds them they are already cut and set. There’s no need to take them, as you would from a mine, and take the time or money to have them cut before selling them. “It’s a step above the mine” he says. After finding the pieces, he takes them to a polishing studio where he uses a sieve to separate the finds from dirt. They are then cleaned, polished and ready to be sold.

Although some jewellery store owners have complained that half of it is probably theirs in the first place, Stepanian likens it to finding discarded can on the street and bringing them back for a refund. Except that refund is worth way more than a nickel

As in every career, there have been ups and downs, complaints from store owners and passersby, and of course, mockery. But whether the idea appeals to you or not, Stepanian does manage to make a living off of what would otherwise be lost for good. One man’s trash is another man’s treasure has never seemed more true a statement. And for Raffi Stepanian, that trash pays the bills every day!