Born in 1946, David Doubilet has long been regarded as one of the best underwater photographers in the world. His work is synonymous with National Geographic magazine and he has also worked for them as an essayist, building on his years of knowledge in the conservation scene.  http://www.flickr.com/photos/aczapiga/8464812087/

As passionate about his art and his technique as he is saving the biodiversity of our oceans, Doubilet is one of the most fascinating photographers/photojournalists working today. 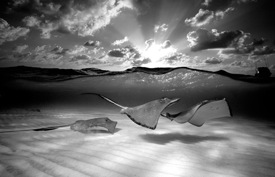 Doubilet acquired his fascination with the ocean at age 8, whilst on a camping trip. He claims that he was restless until his camp leader suggested that he put on a dive mask and look beneath the waves at the beach.

He talks about this as a transformative experience and that from that day forward he knew what he wanted to with the rest of his life. He has since won awards for his photography and currently resides in upstate New York where he lives on the beach.

Doubilet says he thinks of planet Earth as a “water planet”, and working underwater has remained an awe-inspiring and joyous experience for him even at this late stage in his career. He says his aim is to “convince the unconvinced” that the planets oceans are worth saving from the effects of climate change and overfishing.

He has worked with practically every type of underwater animal, sometimes judiciously entering situations with potentially dangerous creatures such as tiger sharks. Doubilet has spoken of his respect for the animal and his interest in the primal fear human beings have of sharks.

As a technical master of underwater photography, Doubilet advises using an SLR camera with a wide-angle lens, at least 14 to 15 mm wide with a fisheye and dome housing and shooting underwater. He has spoken at length about the need to pay careful attention to all aspects of the composition, so the above water and underwater shots are equally interesting, and the need to study the distortion that water adds to photography.

For example, the water magnifies objects by around 25%. Underwater photography also possesses the added challenge of restricting changes to the film and equipment underwater–it is practically impossible to do!

Doubilet has also spoken of the need for underwater photographers to keep dome housing clean and thereby reduce need to perform Photoshop editing on images. You can find more photography tips from him in various interviews from past years.

Sure to inspire generations to come, Doubilet has made a name in his field alongside important figures such as Jacques Cousteau and Henry Cartier Bresson. His work will be studied by students in the future, and he remains a powerful force in the field of photography today.

Expect to see more fascinating work by him and be enthralled by his passion and activism. To see more of his work, go to his official website at: http://www.daviddoubilet.com/. You can also see his work published in National Geographic and he is a founding member of the International League of Conservation Photographers.