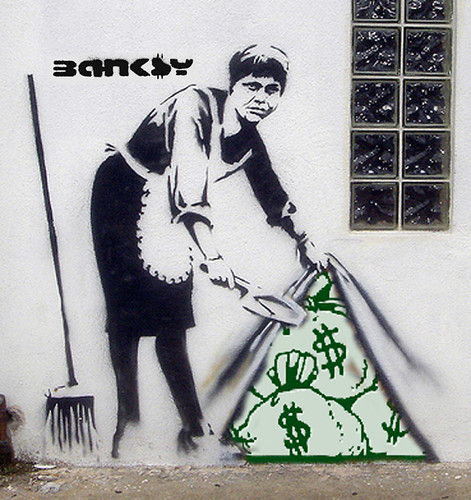 The UK is (on the whole) extremely proud and very intrigued by the graffiti artist ‘Banksy’. Nobody knows who he is, where he lives or what he looks like yet everybody knows what a Banksy piece looks like. Contemporary, political and controversial, Banksy’s artwork is generally a piece of social comment.

He has his haters too of course – the people who think that graffiti is vandalism, no matter how ‘artistic’. But the vast majority of people would love nothing more than a piece of Banksy street art to appear on the side of their house – not least because it would increase the value of the house significantly!

Banksy works at night, undetected. His work appears in the most improbable places – like twenty foot up a very tall building. This only serves to make people more curious about him – how on earth does he get away with it without being spotted? This is extreme graffiti! The pieces are usually stencilled on, meaning he can turn up, work fast and beat it before being caught.

He is subversive and bold, with a wicked sense of humour. His images are striking, humorous and always cause a stir.

Graffiti Artist to the Stars

Banksy has some pretty high-profile fans. Angelina Jolie and Brad Pitt purchased his piece called ‘Picnic’ for around a quarter of a million dollars. It’s a painting of a white middle class family enjoying a picnic, completely unaware of the starving African children standing around them. It’s a pretty obvious piece of social commentary and it typifies what Banksy stands for.

Buy the Piece – Get the House Attached!

Because most of Banksy’s art is street art, it is most often found on pavements, walls and the sides of buildings. If a house has been visited by Banksy then there will be a lot of people that will be willing to pay for not just the art, but the house to go with it! It is widely thought that the art is only so powerful because of where it is – so to remove it is to take a lot away from it. (People have removed his pieces though, sometimes legally and sometimes illegally!).

If the art has been carried out on somebody’s house, that means it becomes their property and they are free to sell it or remove it as they wish. As you can imagine this has caused a lot of controversy over the years – and we bet Banksy loves it!

Banksy’s work has become a tourist attraction and wherever he has made his mark is regularly visited by curious fans. London tour guides always include a Banksy or two in their routes! But Banksy gets all over the place – most cities and towns have been visited by him at some point. He started off in Bristol so this is where his diehard fans head to see his work.

Love him or hate him it’s clear that Banksy is something of a national treasure and he’s still got some tricks up his sleeve!

The author of this post, Barbara Woodberry, works as an editor for magazinesubscriptions.com. She likes to write articles and read science fiction books in her free time.